One of the biggest names the Steelers cut as they trimmed their roster down to 53 yesterday was receiver Eli Rogers. Rogers entered the league as an undrafted free agent in 2015, and had been with Pittsburgh ever since.

It looks like the Louisville product might land on his feet pretty quickly, as he already had a visit with the Dolphins earlier today, a source told Ian Rapoport of NFL Network (Twitter link). After spending his entire rookie season on injured reserve, Rogers had a breakout 2016 campaign. He earned Ben Roethlisberger’s trust and ended up starting eight games, catching 48 passes for 594 yards and three touchdowns.

He wasn’t nearly as productive in 2017 although he still had a role, but he tore his ACL in the playoffs that year. He struggled to make his way back from the injury, and ended up appearing in only three games last year. In those three games he caught 12 passes for 79 yards. The Steelers re-signed him to a two-year deal in March, but he was unable to crack Pittsburgh’s deep receiving corp. The Dolphins are entering a full-blown rebuild and just traded away Kenny Stills, so perhaps Rogers will find a new home in Miami.

The Steelers are keeping one of their own. Pittsburgh is re-signing receiver Eli Rogers, a source told Mike Florio of ProFootballTalk.com (Twitter link). 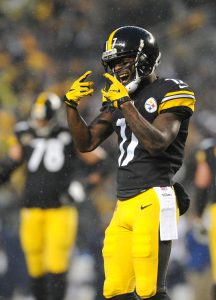 Per Florio, it’s a one-year deal for Rogers. It’s the latest move the Steelers are making to try and help replace Antonio Brown. The team also signed former Colts and Jaguars receiver Donte Moncrief to a two-year deal earlier. This news comes after the Steelers’ failed pursuit of Tyrell Williams. Rogers was an undrafted free agent in 2015, and missed his entire rookie season with an injury.

He came out of nowhere and had a breakout season in 2016, catching 48 passes for 594 yards and three touchdowns in just 13 games. It was a promising debut, but he took a pretty big step backwards the next season when he had just 149 yards and 18 catches. Then in the playoffs, he suffered a torn ACL. The ACL took a long time to recover from, and Rogers didn’t end up making it back until Week 15 of last year.

He did get pretty involved in the offense at the end of the year, catching seven passes for 57 yards in Week 17, which could be a good sign for him moving forward. The Steelers will have JuJu Smith-Schuster as their undisputed number one receiver next year, but after him the situation is up in the air. Rogers, Moncrief, and second-year player James Washington will all be competing for targets behind Smith-Schuster, and any one of them could break out.