This was not how Chris Clark envisioned things going with the Saints. On Wednesday, the Saints announced that the offensive lineman will be out for the season and placed on injured reserve.

Just last week, the Saints inked the NFC South vet to a free agent deal. He was set to compete for one of the Saints’ jobs behind starters Terron Armstead and Ryan Ramczyk and battle with Marshall Newhouse and Michael Ola, but he’ll be shelved for a while after being carted off the field in Sunday’s preseason game.

Without Clark, the Saints can be expected to explore offensive line help once again. Unfortunately, they won’t have much time to vet any of their additions before the start of the season.

Chris Clark will make his way to a third NFC South team. The former Buccaneers UDFA and 2018 Panthers starter signed with the Saints on Monday.

Also known for his stints as a Broncos and Texans starter/swing tackle, the 33-year-old blocker is a New Orleans native. He stands to compete for one of the Saints’ jobs behind starters Terron Armstead and Ryan Ramczyk. Clark joins Marshall Newhouse and Michael Ola as veteran tackle options for New Orleanns.

Clark said (via NOLA.com’s Amie Just) he declined three other offers, including one from the Bucs, but agreed to come in for a Saints workout. This marks the second straight late-summer signing for Clark, who landed in Carolina after Week 1 of last season. He ended up starting 13 games and playing more than 77% of the Panthers’ offensive snaps.

Signed as a swing man in multiple places, Clark found his way into both Denver and Houston’s starting lineups in full-time capacities. Injuries to Ryan Clady, Derek Newton and Duane Brown kept Clark a frequent Broncos and Texans starter between 2013-17. Overall, the former UDFA has made 66 starts since 2011.

Texans offensive tackle Duane Brown has ended his holdout and reported to the club, according to Ian Rapoport of NFL.com (Twitter link). 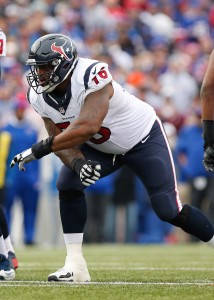 Brown, 32, hasn’t played a single game for Houston this season as he continues to push for a new contract. His decision to rejoin the Texans doesn’t necessarily mean the team’s front office has decided to cave on a new deal, and in fact there’s no indication that’s the case. Instead, Brown is likely reporting in order to gain credit for the 2017 season, as he needed to appear in eight games to do so.

Presuming that he’s ready to immediately step in at left tackle, Brown should provide a significant upgrade on the blindside. Houston has turned to Chris Clark (five starts) in Brown’s absence, but he’s offered a sub-par performance thus far, Pro Football Focus ranks Clark as just the No. 52 tackle among 71 qualifiers. While the Texans’ offensive line has played well in the run game, the unit is 31st in adjusted rack rate, according to Football Outsiders.

If the Texans are intent on not reaching a new deal with Brown, they could conceivably still trade him, something the club is reportedly open to doing. Cleveland currently owns Houston’s first- and second-round picks in 2018, so shipping Brown for draft capital could help the Texans recoup some of its lost assets. The Seahawks, notably, have been linked to a potential Brown acquisition.

But “barring the unforeseen,” Brown is set to play for the Texans, and not act as trade bait, tweets Rapoport. His return is coming at a fortuitous time, as Clark is now expected to miss a week or two after suffering a calf injury, per Adam Schefter of ESPN.com (Twitter link).

WEDNESDAY, 7:42am: Clark’s new two-year deal is worth $6MM, according to Rand Getlin of the NFL Network (Twitter link), who observes that $3MM per year is a nice deal for Clark, assuming he’ll be Houston’s swing tackle.

TUESDAY, 7:05pm: The Texans have reached an agreement with swing tackle Chris Clark, according to Mark Berman of FOX 26 (Twitter link). Clark was set to hit the open market on Wednesday if the two sides hadn’t come to terms on a new deal.

Houston acquired Clark from the Broncos during final roster cutdowns last August, sending a seventh-round selection to Denver to bring in the offensive tackle. Clark, 30, served as a backup to Duane Brown and Derek Newton, and ultimately started four games, playing on a little over a third of the club’s offensive snaps.

A report earlier this week indicated that the Texans would like to work out a new deal with Clark. Having accomplished that goal, however, the team is still expected to draft an offensive tackle to develop as something of an insurance policy as Brown recovers from injury, per John McClain of the Houston Chronicle (Twitter link).