Ulrick John is looking for his next gig. Aaron Wilson of the Houston Chronicle writes that the veteran offensive lineman worked out for the Texans on Friday. 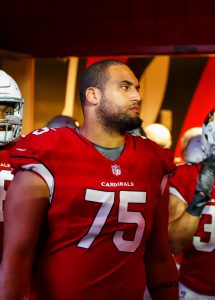 The Georgia State product has bounced around the league since being selected in the seventh-round of the 2014 draft. John has had stints with the Colts, Dolphins, Cardinals, Packers, Patriots, and Saints, appearing in a total of 10 games (three starts). The 27-year-old spent the preseason with New Orleans, but he was released with an injury settlement after suffering a high-ankle sprain.

The Texans are in need of some offensive line depth after they placed Senio Kelemete on the injured reserve earlier this week. Seantrel Henderson also missed practices this week as he dealt with an illness.

John wasn’t the only play to audition for the Texans yesterday. Wilson relays that the team also worked out a handful of defensive backs, including Mike Adams, Marcus Gilchrist, Jonathan Owens and Jordan Richards. The Texans ultimately opted to sign nobody.

Although the Saints only had one pick in the first three rounds of last week’s draft, they used it on an offensive lineman, Erik McCoy. The team is still exploring veteran front-five depth, however.

The Saints will audition both Sam Young and Ulrick John, Aaron Wilson of the Houston Chronicle and Mike Florio of Pro Football Talk report (Twitter links). John’s workout is slated for May 10, when New Orleans will hold its rookie minicamp.

While Derek Newton is the most experienced Saints backup offensive lineman, he has played in one game since October 2016 due to the two patellar tendon tears he suffered in his Texans finale. Michael Ola also resides on New Orleans’ roster.

Young, 31, served as a swing option for the Dolphins the past three years. The 6-foot-8 tackle started eight games in that span and was a nine-game starter in Jacksonville between the 2014 and ’15 seasons. Also a tackle, John has not played since the 2017 season and has not seen action with the same franchise in consecutive years. His most relevant NFL work came in three starts for the 2016 Cardinals.

Additionally, the Saints will work out former Lions and Bears fullback Michael Burton, Herbie Teope of NFL.com tweets. That audition will also take place at next weekend’s rookie camp. Like Young and John, Burton is a former Day 3 pick. He played four seasons combined with the NFC North franchises. Burton played just 49 snaps last season in Chicago but graded out well, per Pro Football Focus.

The first couple of waves of free agency are over, and most teams are now waiting until after the draft has passed to continue digging around the market. But the Falcons are staying active, signing defensive tackle Tyeler Davison earlier today.

They’re also apparently looking for some offensive line help, as the team will host tackle Ulrick John on a visit Monday, a source told Aaron Wilson of The Houston Chronicle (Twitter link). John signed with the Patriots last April, but ended up spending the entire season on injured reserve, although he did win a Super Bowl with the team. Before that he spent most of the 2017 season with the Packers, appearing in five games.

He saw the most significant action of his career in 2016 with the Cardinals, when he started three games at right tackle. The Georgia State product entered the league as a seventh round pick of the Colts back in 2014. He also spent parts of the 2015 season with the Dolphins. John has reached full journeyman status, but evaluators keep seeing enough in him to have him stick around.

Ryan Schraeder started most of last season at right tackle for the Falcons, but the team doesn’t seem like they’re planning on re-signing him. Atlanta could start Ty Sambrailo next year, or they could seek to address the position in the draft. If they sign John, it’ll almost certainly be as depth and not to start.