The Rams have waived cornerback Kareem Orr, per a club announcement. The move will free up an extra spot on their 90-man roster and give them extra flexibility heading into the draft and the subsequent undrafted free agent period. 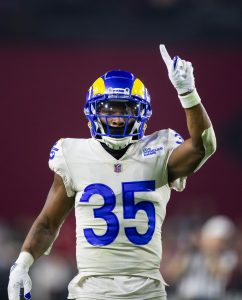 Orr, 25, split his college career between Arizona and Chattanooga. He broke into the league as a UDFA and spent time with the Titans in 2019 and 2020 before hooking on with the Rams last year. Orr wound up playing in two games last year and registered four tackles but didn’t impress in his Week 14 showing against the rival Cardinals.

With Orr gone, the Rams’ cornerback group consists of Jalen Ramsey, Robert Rochell, David Long, Grant Haley, and Tyler Hall. Long and Rochell are projected to start on the outside and in the slot, respectively, though this group could use some additional depth in the draft.

In other Rams news, linebacker Travin Howard has inked his $2.54MM restricted free agent tender, officially keeping him in the fold for the 2022 season. Howard, 26 in May, finished 2021 with 21 stops and one interception across 12 regular season appearances.

The Rams have placed nine more players on the reserve/COVID-19 list, including linebacker Von Miller. Per ESPN’s Adam Schefter (on Twitter), the following players have been sidelined:

The Rams are now up to 25 players on the reserve/COVID-19 list. While the organization will surely activate some players prior to Sunday’s game against the Seahawks, they’ll still have a long list of absences for the contest. Cornerback Jalen Ramsey and wideout Odell Beckham are among the other Rams players who were already stashed on the list.

Yesterday, commissioner Roger Goodell said the NFL wasn’t planning on postponing or cancelling any upcoming games. The Browns and WFT are among the other teams that are dealing with more than 20 players on the COVID list.

Jadeveon Clowney‘s bid at a long-term free agency deal did not go as expected this offseason, and his latest contract year has not unfolded especially well.

The Titans placed their big-ticket free agent pass rusher on IR Saturday. They had ruled Clowney out of Sunday’s game against the Ravens because of a knee injury, but he will now be out until at least Week 14.

Clowney missed Tennessee’s Week 8 tilt but returned to play in the team’s past two games. The former No. 1 overall pick, who signed a one-year deal worth $13MM in August, remains without a sack. He has not recorded a sack since November 2019, illustrating a Titans pass-rushing plan gone awry. The team cut free agency addition Vic Beasley earlier this month. Beasley joined Clowney in failing to register a sack as a Titan.

Although Clowney dealt with extensive knee trouble with the Texans — highlighted by microfracture surgery — he rebounded to make three Pro Bowls. But over the past two seasons, the well-rounded pass rusher’s stock has dropped thanks in large part to multiple injuries. Clowney considered meniscus surgery earlier this month but opted to return to Tennessee’s lineup. In light of Saturday’s news, it seems that operation has not been fully ruled out.

Clowney underwent surgery ahead of his 2018 season with Houston and missed time because of a core muscle injury with Seattle last year. However, this IR stay will result in Clowney entering Week 14 having missed at least five games. The 27-year-old defender has not been sidelined for that many contests since his 2014 rookie season. This will make Clowney’s pursuit of an elusive long-term deal more difficult.