Robert Nkemdiche‘s brief stint in San Francisco has come to an end. The 49ers announced that they have released the veteran defensive lineman.

The former first-round pick somewhat rehabilitated his career with the Seahawks during the 2021 campaign, leading to the 49ers taking a chance on him back in July. There was hope that the veteran could provide some depth during the regular season, but the reality was that he was a healthy body who could fill in for injured defensive linemen Arik Armstead, Hassan Ridgeway, and Maurice Hurst. While Hurst is done for the season, Armstead and Ridgeway sound like they’re close to a return, making Nkemdiche expendable.

Nkemdiche was one of the most highly touted recruits in Ole Miss history, but the end of his tenure saw him getting suspended for the Sugar Bowl after being charged with marijuana possession. Still, the Cardinals took the defensive lineman in the first round of the 2016 draft, but he had a tough time finding a role during his stint in Arizona. In three seasons, Nkemdiche ended up starting only six of his 27 appearances.

He only got into two games with Miami in 2019 after spending much of the season on the PUP, and after getting cut by the Dolphins, he was slapped with a two-game suspension by the NFL. After sitting out the 2020 campaign, he managed to catch on with the Seahawks in 2021. He got into nine games with Seattle, collecting 15 tackles. While he didn’t receive a great grade from Pro Football Focus, the site did suggest the lineman was serviceable in pass-rushing situations. We’ll see if another team is willing to take a chance on Nkemdiche’s untapped potential.

Robert Nkemdiche is on track to play in a regular-season game for the first time since November 2019. The Seahawks elevated the veteran defensive lineman from their practice squad Saturday.

The former first-round pick ended up with the Seahawks in April, ending a lengthy stay out of football. Nkemdiche was not with a team in 2020, with the Dolphins having released him in November 2019 after just two games.

A groin injury halted Nkemdiche’s progress in training camp and forced him to miss the Seahawks’ preseason slate. The Seahawks released the Ole Miss alum on cutdown day but re-signed him on a practice squad deal soon after. Evidently, the former Cardinals interior D-lineman has recovered from the groin issue. Nkemdiche will join a Seahawks D-line that fared well in Week 1, a 28-16 road win in which the reassembled front put frequent pressure on Carson Wentz.

The Cardinals cut bait on Nkemdiche in 2019, weeks after he showed up to training camp out of shape. Nkemdiche suffered a torn ACL in 2018 but had not stood out prior to the injury. The former No. 1 recruit in college football has just six career starts and 4.5 sacks — all coming in 2018 — but may well have the opportunity to see game action again and do so on his 27th birthday.

The Seahawks added some defensive tackle depth in advance of tonight’s draft. Robert Nkemdiche, a first-rounder five years ago, has agreed to join Seattle, per a club announcement. Exact terms of the deal are not yet known. 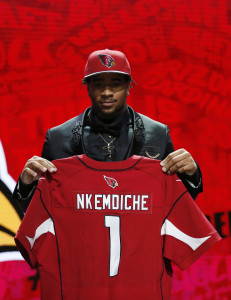 Nkemdiche, 26, had lots of hype coming out of Mississippi in 2016. The Cardinals snagged him with the No. 29 overall pick, but he was hardly seen in his first two pro seasons. Then, in 2018, things started to look up for the imposing lineman as he registered 4.5 sacks, 36 tackles, 12 tackles for loss, and eight quarterback hits in ten games (six starts). Unfortunately, that progress was halted by a knee injury, which led to his release in 2019.

The Dolphins picked Nkemdiche up and deployed him twice in ’19 before putting him back on the curb. After sitting out for the 2020 season, Nkemdiche will now look to revitalize his career with Pete Carroll & Co.