The Lions have signed Chad Hansen, per a club announcement. Terms of the deal are not yet known, but it’s likely a one-year, low-cost deal for the wide receiver. 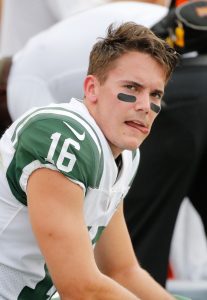 Originally a Jets fourth-round pick, Hansen did not see live action in 2018 or ’19. However, the Texans turned to him late last season, doing so after the team’s original receiver quartet — Will Fuller, Kenny Stills, Brandin Cooks and Randall Cobb — became unavailable due to either injuries, a suspension (Fuller), or a release (Stills). Hansen caught 17 passes for 236 yards and a touchdown in five Houston contests (two starts) last year. In between the Jets and Texans, Hansen also spent some time with the Patriots, Titans, Broncos, and Saints.

To make room on the roster, the Lions have waived wide receiver Jonathan Adams.

McKinley received a lucrative payday to join the Lions, receiving $100K in guaranteed money, including an $85K guaranteed base salary (per Aaron Wilson of the Houston Chronicle on Twitter). After dealing with injuries through his first three years of college, McKinley had a breakout campaign in 2020, hauling in 42 receptions for 717 yards and three touchdowns. He’ll be joined in Detroit by two of his college teammates, offensive lineman Tommy Kraemer and tight end Brock Wright.

Jacobs is one of the more intriguing signings. The cornerback put himself on the NFL radar following a 2018 campaign where he compiled 31 tackles, 12 passes defended, and four interceptions. However, he missed the majority of the 2019 season with a torn ACL, and he ultimately sat out the entire 2020 campaign.