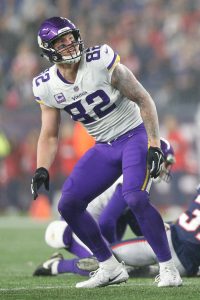 We heard recently that the market for Rudolph was starting to heat up. The Buccaneers were listed among the known suitors, as were the Vikings, Rudolph’s former team. Rudolph was also connected to the Broncos and his former GM George Paton earlier in the offseason. Ultimately, it was the Buccaneers who managed to land the free agent, and they now have a tight end who can somewhat replace the production of Rob Gronkowski, who announced his retirement earlier this offseason.

It’s been a bit since Rudolph has come close to even matching Gronk’s 2021 numbers, but at the very least, he’ll provide Brady with another reliable option at the position. Rudolph will likely compete with Cameron Brate for offensive reps, with rookies Cade Otton and Ko Kieft now competing for the third TE spot on Tampa Bay’s roster.

The Giants inked Rudolph to a two-year, $12MM deal in March of 2021, but following a season where the tight end finished with only 26 catches for 357 yards and one touchdown, he received his walking papers. Prior to his brief stint in New York, Rudolph spent the first 10 seasons of his career in Minnesota, earning a pair of Pro Bowl nods. He ranks sixth in Vikings history in receptions (453) and receiving touchdowns (48), and he’s 10th in receiving yards (4,488). Rudolph saw reduced targets during his final seasons with the organization, but he was still relatively consistent in the yards-per-catch category (including a career-high 11.9-yards per reception in 2020).