The Bears have brought in an experienced offensive lineman ahead of training camp opening up. ESPN’s FIeld Yates reports (via Twitter) that Chicago is signing Michael Schofield. The move comes one day after he worked out with the team. 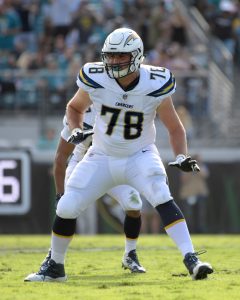 The 31-year-old was a third-round pick of the Broncos in 2014. He was a full-time starter at right tackle, then right guard, in 2015 and 2016 (in which he earned a career-high PFF grade of 72). Despite playing a notable role on the Broncos’ Super-Bowl winning team, he was waived just ahead of the 2017 campaign.

That began his first Chargers tenure, which lasted three seasons. After making 15 appearances at tackle in 2017, he was once again a full-time starter along the interior for the next two years. He remained a consistent, if unspectacular, presence throughout that time, leading him to a one-year deal with the Panthers in 2020. He spent the summer of 2021 in Baltimore, but was cut at the end of August.

As a free agent, he headed back to the Chargers last season, with whom he made 15 appearances (including 12 starts). As a member of the team’s much-improved offensive front featuring Rashawn Slater and Corey Linsley, Schofield posted a pass-blocking grade of 75.2. Los Angeles continued their investment in protecting Justin Herbert by using their first-round pick on Zion Johnson.

In Chicago, Schofield will join a unit which lost James Daniels in free agency. The Bears attempted to land Bills guard Ryan Bates by signing him to an offer sheet, but Buffalo matched the contract. Schofield will provide a veteran presence to an offensive front very much in need of improving, as Justin Fields looks to take a step forward in his second season.