Sean Mannion spent part of last year’s training camp with the Seahawks, and the veteran backup quarterback agreed to return to the team Wednesday.

Seattle is adding the recent Minnesota backup to its practice squad, Tom Pelissero of NFL.com tweets. The Vikings had shown interest in keeping Mannion on their P-squad, but the team essentially demoted him by trading for Nick Mullens this month. Mullens made Minnesota’s active roster, while Mannion and 2021 third-rounder Kellen Mond were cut Tuesday.

The Seahawks cut Mannion last year, and he found his way back to the Vikings’ QB2 role. But this partnership looks a bit different a year later. Going into their 2021 preseason, the Seahawks had Russell Wilson still riding a nine-season run of perfect attendance. Wilson, who missed his first NFL games last season, is now with the Broncos. Despite being connected to Baker Mayfield and Jimmy Garoppolo this offseason, the Seahawks are planning to use Geno Smith as their starter.

Wilson’s former backup beat out Drew Lock for the starting gig. Mannion would stand to step in behind this duo, though the Seahawks also cut Jacob Eason on Tuesday. Eason, a Washington alum, caught on with the team via an October 2021 waiver claim.

Despite being a former third-round pick, Mannion has never made inroads to being a starter in the NFL. He backed up Jared Goff primarily with the Rams and played behind Kirk Cousins with the Vikings. Mannion, 30, has started three career games. Two of those came in meaningless Week 17 situations; the third came after Cousins tested positive for COVID-19 last season. The Oregon State alum holds a 61% career completion rate but has one TD pass compared to three INTs.

12:45pm: Mannion also received word he has been cut, Chris Tomasson of the St. Paul Pioneer Press tweets. This leaves only Cousins and Mullens at quarterback on Minnesota’s roster. Unlike Mond, however, it appears Mannion has a chance to come back. The Vikings would like Mannion to be their practice squad QB, per Tomasson. As a vested veteran, Mannion does not need to pass through waivers. He can join Minnesota’s practice squad as soon as Wednesday.

10:30am: The Vikings are in line to sort out their crowded quarterback room. The team is waiving Kellen Mond, reports NFL Network’s Tom Pelissero (on Twitter). 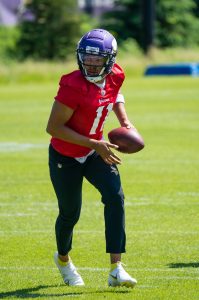 Minnesota drafted the Texas A&M product in the third round last year, setting him up as a potential Kirk Cousins successor. The interest shown by the Texans in the draft process demonstrated how he was regarded coming out of college.

In his final season with the Aggies, Mond set a new career-mark in completion percentage (63.3%), and passer rating (146.9). While not known for his mobility, he added 294 yards and four touchdowns on the ground as well, cementing his status as a Day 2 candidate. After just one NFL season – during which he made one appearance – though, his future is now far more uncertain than his age and draft status would imply.

The Vikings spent training camp splitting reps evenly between Mond and veteran Sean Mannion. That competition alone left the former in danger of being left off the 53-man roster, but another recent move left him in that position to an even greater extent. The Vikings traded for Nick Mullens, who was himself displaced as a backup by Jarrett Stidham in Vegas.

With Mond on waivers, the Vikings (now led by GM Kwesi Adofo-Mensah) are content to move forward with Cousins and Mullens at the top of the depth chart. Mannion, meanwhile, is now without competition for the No. 3 role.

The Raiders faced a decision with respect to their backup quarterback position at some point before the start of the regular season. They have apparently made it, as the team is sending Nick Mullens to the Vikings in exchange for a conditional 2024 seventh-round pick (Twitter link via NFL Network’s Tom Pelissero).

His colleague Ian Rapoport adds that Mullens must be active for one game this season for Vegas to receive the pick. The Raiders signed Mullens this April as an insurance policy for starter Derek Carr. The former UDFA spent three seasons in San Francisco, wining five of his 16 starts filling in for Jimmy Garoppolo. He then joined the Eagles briefly, but spent last season in Cleveland, where he made one start as the Browns were dealing with a long list of COVID-related absences.

One month after signing Mullens, though, the Raiders also traded for Jarrett Stidham. The former Patriots fourth-rounder got an opportunity to once again work with Josh McDaniels in Vegas, and has impressed in training camp and the preseason to the point where he has won the competition with Mullens for the No. 2 spot.

The Vikings, meanwhile, will likely be able to accommodate Mullens for their backup gig. Minnesota drafted Kellen Mond in the third round last year, but have also rostered Sean Mannion. The two have been receiving equal work so far in training camp, indicating that neither has significantly distanced themselves from the other. With Mullens, who has familiarity in the kind of offensive system new head coach Kevin O’Connell will install, the Vikings will have more of a known commodity behind Kirk Cousins.

The team will be likely to try and retain Mond as well, given his draft status. His hold on a 53-man roster spot has now become much less certain, though, as both the Raiders and Vikings look for clarity in their QB rooms in the build-up to campaigns carrying significant expectations.

A strange situation may be developing in Chicago. Roquan Smith made his trade request public earlier this week, and the standout linebacker is staging a hold-in effort at Bears camp. Smith does not have an agent, but Mike Florio of Pro Football Talk reports a person claiming to represent the fifth-year defender has been contacting teams to gauge trade interest. The person calling teams is not an NFLPA-certified agent, per Florio, and the Bears have not given Smith permission to seek a trade. The team still wants to extend the two-time second-team All-Pro, even though Smith does not have much hope for salvaging this situation. A team that negotiated with this unknown Smith representative would face tampering charges. While teams are interested in the former top-10 pick, Doug Kyed of Pro Football Focus does not expect a first-round pick to be offered — if it reaches the point the Bears are fielding offers.

Here is the latest from the rest of the NFC North: