After a shocking win over the Cardinals yesterday, the Lions will be looking to carry that momentum into next weekend’s game against the Falcons. Unfortunately, Detroit might have to go for their second-straight win without their starting QB. The Lions announced today that they’ve placed quarterback Jared Goff on the reserve/COVID-19 list. 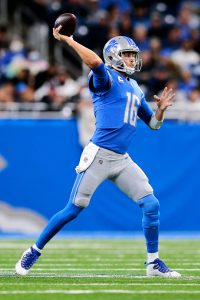 While things certainly haven’t gone right in Detroit this season, the team’s struggles aren’t entirely Goff’s fault. The 27-year-old has completed 67 percent of his passes this year for 3,007 yards, 17 touchdowns, and eight interceptions. He’s also been victim to a career-high 34 sacks for the 2-11-1 Lions.

Goff was forced to miss Week 11 against the Browns, and backup Tim Boyle ended up throwing for only 77 yards and two interceptions in the loss. If Goff isn’t able to play this weekend, there’s a chance Boyle gets another start for Detroit.

The Lions made a handful of additional moves today. Besides Goff, offensive tackle Matt Nelson was also placed on the reserve/COVID-19 list, while cornerback Mark Gilbert and running back Jamaal Williams were activated from the list. The team placed linebacker Alex Anzalone on IR, and they signed running back Craig Reynolds to the active roster following a breakout game yesterday.

The Steelers drafted nine players over the weekend, but they weren’t done shopping. On Sunday, the Steelers announced the signings of eight undrafted free agents:

Brown is among the more notable players in this bunch. After earning first-team All-Big Ten honors, Brown declared early with the expectation that’d be selected in Round 4 or 5. Instead, he watched as 250+ players heard their names called. Still, he’s likely secured a better-than-average UDFA signing bonus from the Steelers. Last year, Brown notched five interceptions in just seven games. For his Spartan career, Brown finished with 54 stops, two tackles for a loss, two sacks, 16 pass defenses, and one touchdown across 26 games.