Here are the minor moves to wrap up the weekend:

Surratt went undrafted last year after opting out of the 2020 college football season, an option given to all football players that year due to COVID-19. He considered entering the 2020 NFL Draft after an impressive redshirt sophomore season at Wake Forest, but ultimately decided to return before eventually opting out. Despite only playing in 9 games with the Demon Deacons in 2019, Surratt totaled 66 receptions for 1,001 yards and 11 touchdowns. Unfortunately, averaging 111.22 receiving yards per game in 2019 didn’t build his draft stock enough for the 2021 Draft. Surratt has spent time on the practice squads for the Lions and the Birmingham Stallions of the USFL but hasn’t seen the field for either. The Chargers will hope to tap into that explosive play from three years ago.

Wake Forest wide receiver Sage Surratt announced that he will opt out of the 2020 college football season and turn his attention to preparing for the 2021 NFL Draft (Twitter link). Surratt, widely projected to be a first-round pick next April, is just the latest college football star to skip out on the upcoming campaign. 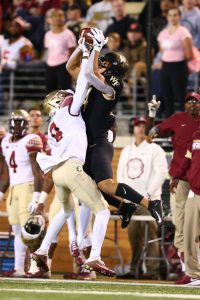 Surratt, who boasts size and power at 6’3″, caught some attention as a frosh in 2018 with 41 catches for 581 yards and four touchdowns. Last year, he made an even stronger case for NFL evaluators: 66 receptions for 1,001 yards and eleven scores.

More players from the ACC, SEC, and Big 12 conferences are expected to pass on playing this year, including some of the game’s top prospects for the upcoming draft.