The Packers are adding a key piece back to their defense. Matt Schneidman of The Athletic reports (via Twitter) that Green Bay has activated linebacker Krys Barnes from injured reserve. 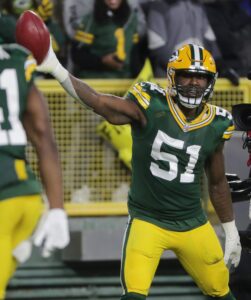 Barnes suffered a significant ankle injury during Week 1, knocking him off the field for nearly two months. He returned to practice earlier this week, and it didn’t take very long for him to make his way back to the active roster.

The 2020 undrafted free agent out of UCLA has quickly established himself as a starting-caliber linebacker. In 30 career games (23 starts), the 24-year-old has collected 161 tackles, nine tackles for loss, and a pair of fumble recoveries. He’s also started three postseason games, compiling another 20 tackles. Pro Football Focus wasn’t particularly fond of his performance over the past two years, although they did grade him out as an above-average pass-rusher.

Barnes’ return couldn’t come at a better time for the Packers. Star linebacker De’Vondre Campbell suffered a knee injury during Green Bay’s Week 8 loss to the Bills, and he was ruled out for Sunday after missing the entire week of practice. This is a rare absence for the 29-year-old, as he previously missed only a single game over the past five-plus seasons. Rookie first-round pick Quay Walker will take over the ‘communication helmet’ for tomorrow’s game against the Lions.

The Bears designated starting left guard Cody Whitehair for return from injured reserve today, opening the 21-day practice window for him to be activated. Whitehair has been on IR since suffering a knee injury in a Week 4 loss to the Giants.

Getting Whitehair back in the lineup should be really beneficial for the Bears and developing quarterback Justin Fields. Whitehair has been a full-time starter on the Bears’ offensive line since he was drafted in the second round of the 2016 draft. The former Pro Bowler brings back a key veteran presence in Chicago and could help them push to get back in the race for the NFC North.

Once they feel he’s ready, Whitehair should replace Michael Schofield at left guard. If the Bears don’t feel they can activate him within the 21-day practice window, Whitehair will return to IR for the rest of the season.

Here are a few other injury updates from around the NFL:

Carted off the field in the Packers’ Week 1 game in Minnesota, Krys Barnes landed on injured reserve Tuesday. The Packers will be without the two-year linebacker starter for at least four games.

Although a cart and an aircast were necessary, Barnes is not expected to miss the rest of the season. He suffered a high ankle sprain and a calf injury during the Packers’ season-opening loss, Tom Pelissero of NFL.com tweets. The team promoted tackle Caleb Jones from its practice squad to take Barnes’ roster spot.

The Packers’ Barnes plans changed this offseason, when they re-signed 2021 All-Pro De’Vondre Campbell and used a first-round pick on Quay Walker. Campbell and Walker are Green Bay’s top off-ball linebackers, though Barnes supplies quality depth. He played nine defensive snaps during his abbreviated Sunday of work.

A UDFA out of UCLA, Barnes became a starter fairly quickly as a pro. The Packers’ Week 1 Minnesota tilt two years ago introduced Barnes as a starter, and he trotted out with the team’s first-stringers 22 more times between the 2020 and ’21 seasons. Pro Football Focus rated Barnes just inside the top 50 at the linebacker spot last season. Barnes, who made 81 tackles last season and recovered two fumbles, should be back as a Green Bay second-stringer at some point this year.

The NFL adjusted its IR rule this offseason. After allowing teams to make unlimited IR-return transactions over the past two seasons, the league capped those moves at eight this year. That will reintroduce some strategy regarding IR, though not nearly as much as before the COVID-19 pandemic.

The Packers have run into more trouble with the coronavirus, joining several teams in that regard this week. After seeing COVID-19 deplete their backfield, the Packers learned one of their starting defenders played Thursday night before testing positive Friday morning, Adam Schefter of ESPN.com tweets.

Linebacker Krys Barnes landed on Green Bay’s reserve/COVID-19 list Friday. The Packers also placed rookie quarterback Jordan Love on the list. Barnes tested positive for the coronavirus, Ian Rapoport of NFL.com tweets. It is not known if Love has tested positive. He may well be a close contact. Players do not have to test positive to be placed on a team’s reserve/COVID list.

Considering the timeline here, this is obviously a key situation for the Packers. A UDFA out of UCLA, Barnes started and played 25 snaps for the Packers. He left the game with a calf injury. Barnes has started all but one Packers game this season.

The Packers have become the latest team to bring in a class of undrafted free agents. Green Bay announced that it’s agreed to terms with the following UDFAs:

As you may have heard, the Packers didn’t select a wide receiver at any point during the 2020 draft. Instead, Stewart will represent the only collegiate wideout added to Green Bay’s roster. In his senior season, the 6’2″, 216-pound Stewart posted 49 receptions for 697 yards and two touchdowns. Lance Zierlein of NFL.com praised Stewart’s size and willingness to block, but noted the ex-Spartan’s “catch technique may need to be stripped and rebuilt.”