The Broncos have already made several moves in the secondary this offseason, and now they’re addressing the defensive front. Denver has agreed to terms on a deal with defensive tackle Shamar Stephen, a source told Ryan O’Halloran of the Denver Post (Twitter link). 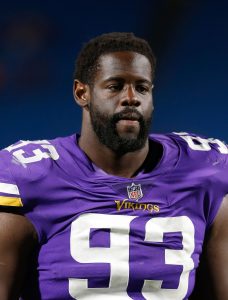 There’s some familiarity here, as new Broncos GM George Paton came over from Minnesota, where Stephen has spent most of his career. Stephen was drafted in the seventh-round back in 2014, and was with the Vikings for his first four seasons. He signed a one-year deal with the Seahawks in 2018 before returning home in 2019 with a three-year, $12.45MM contract from the Vikings.

He made it through two years of that pact before being released last month. He started all 16 games for Minnesota last year, racking up 34 tackles and a half sack while playing just over 60 percent of the defensive snaps. He’s started 65 games in his seven-year career, including at least 14 in each of the past three.

Dre’Mont Jones, Shelby Harris, and nose tackle Mike Purcell currently slot in as the three starters up front in Denver’s 3-4 defense. Stephen could play either outside or inside and will presumably fill a rotational role behind those three guys.

The Vikings are set to cut defensive tackle Shamar Stephen, as Adam Caplan of ESPN.com tweets. Previously, he was set to carry a cap hit of $5.083MM. Releasing Stephen will save $3.75MM on the books for 2021.

A seventh-round Vikings pick in 2014, Stephen has spent most of his career in Minnesota, save for his 2018 season with the Seahawks. He’s spent the last two years as a full-time starter, serving as a durable, though not spectacular, run-stuffer.

The recent arrival of Dalvin Tomlinson pushed Stephen out of the equation. The 6’3”, 320-pound defensive tackle will pair with Michael Pierce in Stephen’s place, albeit on a more expensive two-year, $22MM deal.

Before signing Tomlinson, the Vikings were also connected to Trey Hendrickson. Ultimately, the ex-Saints standout signed with the Bengals instead.

Shamar Stephen spent the 2018 season with the Seahawks but will return to the Vikings next season. The free agent defensive tackle will sign a three-year deal with Minnesota, Dan Graziano of ESPN.com tweets.

The Seahawks used Stephen as a starter for most of their playoff-qualifying campaign. Stephen was a full-time starter for the 2016 Vikings but was used as a backup prior to his free agency defection.

This move may be a more cost-effective option than retaining Sheldon Richardson, but it’s not certain the high-profile interior defender is out of the picture for the Vikings just yet. Although, Minnesota is low on cap space.

Stephen’s impending Twin Cities return will continue the Seattle-to-Minnesota defensive line pipeline. Richardson joined the Vikings in 2018, and after a short Seahawks stay, Tom Johnson returned to the Vikings after being cut last year. Johnson is also a free agent.

A seventh-round Vikings pick in 2014, Stephen registered a career-high two sacks last season. He played 538 snaps with the Seahawks, grading as Pro Football Focus’ No. 98 overall interior defender in 2018.