Tom Johnson is officially hanging up his cleats. The former Vikings defensive tackle is retiring from the NFL, he told Chris Tomasson of the St. Paul Pioneer Press (Twitter link).

We heard early last offseason that Minnesota was interested in bringing him back, but Johnson ended up spending 2019 out of football. Johnson said he had some offers from teams but didn’t want to play on a minimum deal, Tomasson tweets. The Southern Miss product was an undrafted free agent in 2006, and it took him a while to find his footing in the league. After playing in NFL Europe, the AFL, and the CFL, he finally made his NFL debut in 2011 with the Saints.

He broke out in 2014 with the Vikings, racking up 6.5 sacks. The following year he started eight games, and had another 5.5 sacks. In 2017 he started 15 games and was a large part of the defense that made it to the NFC Championship Game. He signed with Seattle in 2018 but quickly ended up back in Minnesota when the Seahawks cut him after just one game.

Johnson will finish his playing days with 186 tackles and 25.5 sacks in 116 games. He carved out a remarkable career for such an unheralded prospect, and all of us here at PFR wish him the best in retirement.

Tom Johnson is set to hit the open market next Thursday, but the Vikings would like to keep him in the fold. The defensive tackle says the Vikings have “interest” in re-signing him, according to Chris Tomasson of the Pioneer Press (on Twitter).

Johnson, for his part, would “definitely like to return,” but cautions, “you just never know how free agency is going to unfold.” The 34-year-old (35 in August) adds that he not looking for a multi-year deal, which should help his cause with the Vikings or any other interested club.

Last year, Johnson left the Vikings to sign a one-year deal with the Seahawks. In need of a roster spot before a September showdown with the Bears, the Seahawks cut him with the hope that they could quickly re-sign him to the roster. The Vikings swooped in and spoiled Seattle’s plans, signing Johnson to a fresh one-year deal.

In 14 games (13 for the Vikings, one with the Seahawks), Johnson tallied 4.5 sacks and 24 total tackles. Johnson ultimately graded out as just the No. 94 ranked interior defender in the NFL out of 112 qualified players, per Pro Football Focus, but the advanced metrics have never been high on the veteran.

Reports of discord within the Patriots‘ organization are nothing new, but a new book by ESPN’s Ian O’Connor has shed even more light on the dynamic between head coach Bill Belichick and quarterback Tom Brady. In “Belichick: The Making of the Greatest Football Coach of All Time,” O’Connor reports that Brady would “divorce” Belichick if he could, but feared alienating New England fans after the Patriots traded backup (and possible successor) Jimmy Garoppolo to the 49ers last season. “If you’re married 18 years to a grouchy person who gets under your skin and never compliments you, after a while you want to divorce him,” a source told O’Connor. Brady will return for yet another season with the Belichick and the Patriots after agreeing to a revised contract that includes multiple performance-based incentives. 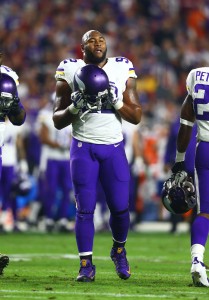 For the time being, Tom Johnson is out of a job. NFL.com’s Tom Pelissero reports (via Twitter) that the Seahawks are releasing the veteran defensive tackle. The team needs an extra roster spot for Monday’s game against the Bears, and they’ll “likely” re-sign Johnson next week.

Back in March, the 34-year-old signed a one-year deal with Seattle that could be worth up to $2.7MM (Pelissero notes that Johnson’s contract has already been guaranteed). The defensive tackle was coming off a four-year stint with the Vikings during which he played at least 40% of the team’s defensive snaps in each campaign. Johnson saw a career-high 68% playing time last season, and he finished the year with 17 tackles and two sacks. Pro Football Focus graded him as roughly a league-average defensive tackle, as Johnson ranked 60th among 122 qualifying interior defenders.

The 2006 undrafted free agent out of Southern Miss started the Seahawks’ season-opener against the Broncos, compiling a single tackle. With the team in need of a roster spot, they decided to temporarily release Johnson, leaving them with Jarran Reed, Shamar Stephen, Nazair Jones, and Poona Ford as their options at defensive tackle.

The Seahawks have agreed to sign defensive tackle Tom Johnson to a one-year deal worth up to $2.7MM, according to Tom Pelissero of NFL.com (Twitter link).

Seattle witnessed the Vikings poach interior defender Sheldon Richardson last week, and now the Seahawks have done the same to Minnesota by signing Johnson. Of course, the 32-year-old Johnson isn’t the caliber of player that is Richardson, but he’ll give Seattle depth along its defensive line as the club enters something of a mini-rebuild.

Johnson is coming off a four-year run with the Vikings during which he played at least 40% of the team’s defensive snaps in each campaign. In 2017, Johnson saw a career-high 68% playtime, and posted 17 tackles and two sacks during that time. Pro Football Focus graded him as roughly a league-average defensive tackle, as Johnson ranked 60th among 122 qualifying interior defenders.

The Seahawks, who have also met with Vikings free agent Shamar Stephen, will add Johnson to a defensive tackle group that also includes Jarran Reed, Nazair Jones, Garrison Smith, and — depending on his health — 2017 second-round pick Malik McDowell.

Vikings free agent defensive tackle Tom Johnson is scheduled to meet with the Seahawks on Monday, Tom Pelissero of NFL.com tweets. Johnson reportedly also has drawn interest from the Raiders and Bills.

The Vikings are trying to hammer out a deal with Seahawks free agent Sheldon Richardson, but it has been said that they would like to retain Johnson as well. The Vikings and Johnson might not see eye-to-eye on his value, however. Johnson asked for a one-year, $4MM extension last season, but the Vikings refused. If Johnson can get an equivalent deal elsewhere, he might be a goner.

The Seahawks would like to keep Richardson, but it appears that they will not be able to keep up with the outside bidding for him. Johnson can help fill that void, though he can’t personally replace his production.

Johnson has 16 sacks to his credit over the last four seasons. He’ll celebrate his 34th birthday in August, so he’s probably looking at a one-year deal.