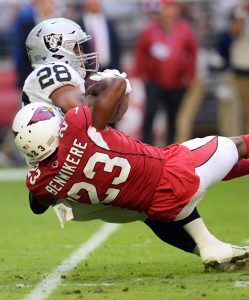 A day after locking up Adam Thielen with a huge extension, the Vikings are making a much more under the radar move at the wide receiver position. Minnesota is signing Jordan Taylor, a source told Aaron Wilson of The Houston Chronicle (Twitter link). 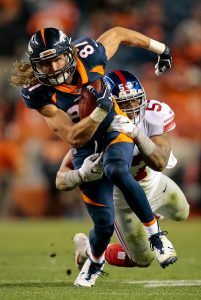 Per Wilson, it’s a one-year deal for Taylor. Taylor visited with the Vikings on Monday, and they apparently liked what they saw. He comes to Minnesota from Denver, where he spent the first four years of his career. An undrafted free agent from Rice, Taylor signed with the Broncos back in 2015. He spent his entire rookie season on the practice squad, but made a big impact in his second year. In 2016 he appeared in all 16 games, catching 16 passes for 209 yards and two touchdowns while also contributing on special teams.

Bob Condotta of The Seattle Times tweeted that the Seahawks “had also shown interest” in the wideout. In 2017 Taylor missed some time with injury, catching 13 passes for 142 yards in ten games and two starts. Nicknamed ‘Sunshine’, Taylor became a fan favorite during his time in Denver. He missed the entire 2018 season while recovering from hip surgery, but is apparently healthy now. He’s likely to be little more than a depth piece in Minnesota, assuming he makes the team.

We heard recently the team wasn’t going to be bringing back Aldrick Robinson and was looking for other options, so perhaps Taylor could fill his role. Robinson had 17 receptions for 231 yards and five scores last year.

His new team dealing perhaps the final blow to his previous employer’s 2018 playoff hopes via 19-17 win in Week 9, Texans wide receiver Demaryius Thomas expressed issues he had with the Broncos’ coaching staff. Thomas said during an interview with former Broncos Ray Crockett and Rod Smith on Orange and Blue 760 (via The Athletic’s Nicki Jhabvala, on Twitter) Vance Joseph informed him he would be staying in Denver after the trade deadline. Though, to be fair to the second-year head coach, he may not have known the status of John Elway‘s progress in acquiring a mid-round pick for the veteran wideout. Thomas said his agent told him Elway wanted a fifth-round pick in a trade, helping perhaps to explain the GM’s decision to accept a Texans fourth-round pick.

Additionally, Thomas told Crockett and Smith the coaching staff made him feel as though he was holding back rookies Courtland Sutton and DaeSean Hamilton and that first-year receivers coach Zach Azzani asked only Thomas to come out of a Jets loss to give Hamilton more snaps (Twitter links via Jhabvala). Joseph said (via Mike Klis of 9News) he didn’t recall a trade-related conversation with Thomas unfolding the way the since-jettisoned wideout said it did.