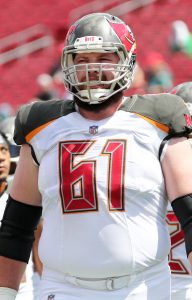 Wester spent the past three seasons with the Buccaneers before being non-tendered as a restricted free agent, and he’ll reunite with former Tampa Bay offensive line coach George Warhop, who now holds the same title in Jacksonville. While the Jaguars are set at left tackle with Cam Robinson, the club has a wide open slot on the right side following the release of Jermey Parnell, so Wester could compete for a starting job.

Wester, 26, went undrafted out of Missouri Western State in 2016. He’s appeared in 27 NFL games (all with the Buccaneers), but hasn’t been asked to play much of a significant role, as he’s made only one start during his career. In 2018, Wester played 116 offensive snaps, which marked a career-high, but Pro Football Focus assigned him a poor grade of 46.6 for his performance.

Before signing with the Jaguars, Wester also worked out for the Lions, Chiefs, and Falcons, according to Greg Auman of The Athletic (Twitter links).