Buccaneers running back Doug Martin was a healthy scratch against New Orleans over the weekend and he’ll also be inactive for the season finale against Carolina, Rick Stroud of the Tampa Bay Times writes. With Martin out of the picture, the Bucs plan to sign running back Russell Hansbrough off of the Giants’ practice squad. 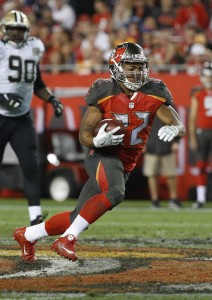 Since returning from a hamstring injury, Martin has struggled to regain the form that made him a top running back in the league. Now, his future with the Bucs is not clear as the offseason approaches. Martin is signed to a five-year, $35.75MM contract he inked last March, including $15MM guaranteed. Releasing Martin this offseason would not save the team any money against the 2017 cap, so their options are limited.

Jacquizz Rodgers started in place of Martin on Saturday and rushed for 63 yards and a touchdown on 15 carries. Although he’s had his moments this season, like his 154-yard game against the Niners in October, Rodgers might not be what the team has in mind for a No. 1 RB next season.