The Chargers announced that they’ve placed safety Jaylen Watkins on injured reserve after he suffered a torn ACL in Saturday night’s preseason games, as Ian Rapoport of NFL.com tweets. 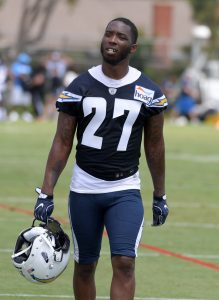 Watkins, 26, wasn’t expected to start for Los Angeles in 2017, as the club will deploy first-round pick Derwin James and Jahleel Addae at safety. But the former fourth-round pick could have offered valuable depth, as Watkins appeared in 36 games during a four-year run with the Eagles. Philadelphia opted not to tender Watkins as a restricted free agent this offseason, and he subsequently met with the 49ers before landing with the Chargers.

Even with Watkins sidelined, Los Angeles has enough safety depth to get by in 2018. James and Addae project to be backed up by Rayshawn Jenkins and Adrian Phillips, while A.J. Hendy could be kept on the the Chargers’ practice squad. Fourth-round rookie Kyzir White, drafted nominally as a safety, is expected to play a sub-package linebacker role in LA.

To replace Watkins on their roster, the Chargers announced that they’ve claimed defensive back Micah Hannemann off waivers from the Browns.