The Eagles do not plan to tender defensive back Jaylen Watkins as a restricted free agent, Ian Rapoport of NFL.com (on Twitter) hears. Watkins was a candidate for the original round tender, but instead it sounds like he’lll be allowed to explore the open market in March. 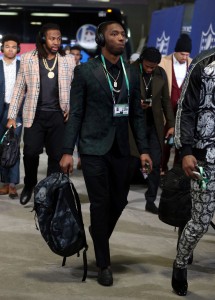 Watkins first joined the Eagles a fourth-round pick in the 2014 draft. The Florida product didn’t see a ton of time on the field in his first two seasons, but he got his chance to be a regular contributor starting in 2016. Watkins has appeared in 28 regular season games over the last two years and recorded 51 total tackles.

This past season, Watkins saw most of his playing time on special teams with only 170 defensive snaps to his credit. He was not a star for the defending champs, but he still played a vital role.

“He’s Mr. Do-It-All,” Eagles cornerback Jalen Mills recently said of Watkins (via the News-Press). “Whatever spot, if anybody happens to bust a shoelace, equipment issue, you can plug him in, and you know he’s going to go out there and do the job.”