The Texans are swapping one safety for another. Aaron Wilson of the Houston Chronicle tweets that the team is re-signing A.J. Hendy. To make room, Houston is cutting Tyvis Powell. 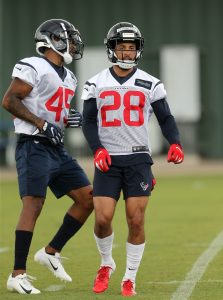 Hendy, a 2016 undrafted free agent out of Maryland, was signed by the Texans off the Chargers practice squad last January. He was waived by Houston last week, but the team apparently regretted their decision and brought him back. The 26-year-old has one NFL game on his resume, although he’s had consistent practice squad gigs since he entered the league.

Powell went undrafted out of Ohio State back in 2016, and he’s bounced between five different teams (including separate stints with the 49ers) over his three years in the league. The 25-year-old has appeared in 18 career games, including seven this past season with the 49ers. He finished 2018 with six tackles and one forced fumble. He joined the Texans last weekend.

The Texans have plenty of depth at safety, with Tashaun Gipson and Justin Reid slotted in as starters. Hendy will compete with the likes of Briean Boddy-Calhoun, Jahleel Addae, and A.J. Moore for backup reps.