Emanuel Hall‘s season is likely over. The Redskins wide receiver announced via Instagram that he has torn his Achilles. 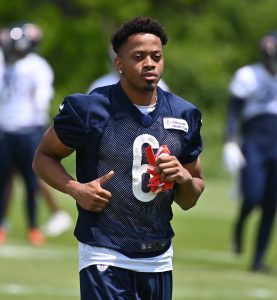 Hall, 23, joined the Bears as an undrafted free agent in 2019. After the Missouri product missed the final cut, he went on to spend time with the practice squads of the Bucs and the Redskins. This year, the Redskins re-signed him on a futures deal, giving him a place on the 90-man offseason roster and a chance to make the team. Now, he’ll likely have to wait until 2021 before retaking the field.

Before the injury, Hall was pushing for one of the final spots on the WR depth chart, though he was facing some long odds. Terry McLaurin, Kelvin Harmon, and Trey Quinn headline the group, while Cam Sims, Steven Sims Jr., and fourth-round pick Antonio Gandy-Golden are among those fighting for supporting roles.

In other Redskins news, Ryan Kerrigan says he wants to finish out his career with the Redskins. It’s not clear if the Redskins are willing to discuss an extension, but a longer deal could make sense for both sides. The veteran edge rusher’s $11.5MM salary for this year is totally non-guaranteed; an extension could smooth out that hit and give the Redskins some extra space.