For a second straight season, Derrius Guice will land on IR. The Redskins will go in this direction again with their starting running back, John Keim of ESPN.com tweets.

Guice underwent knee surgery earlier this week, J.P. Finlay of NBC Sports Washington notes. The Redskins plan on using one of their IR-return slots on Guice, with Ian Rapoport of NFL.com adding this injury was expected to shelve the 2018 second-rounder for 4-6 weeks (Twitter links).

Washington will not be able to redeploy Guice until Week 11. His best hope for the first two years of his NFL career will be playing in eight games. The LSU product missed all of the 2018 season due to a knee injury. While this latest setback damaged his other knee, it will still cap his season at eight games.

It took Guice most of this offseason to recover from the initial knee injury. He experienced multiple setbacks in that recovery. He will be eligible to practice again after six weeks. During that span, the Redskins look likely to reform their 2018 backfield duo of Adrian Peterson and Chris Thompson. Peterson was a healthy scratch in Week 1, but after eclipsing 1,000 yards in 2018, the 34-year-old back looks set to play a key role again. The Redskins also have Wendell Smallwood, whom they claimed off waivers from the Eagles earlier this month.

The Redskins will also place defensive lineman Caleb Brantley on IR, per Keim.

The Browns announced Friday that they have signed sixth-round defensive lineman Caleb Brantley, the seventh member of their 10-player draft class to ink his rookie deal. 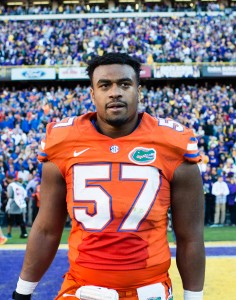 While most low-round selections aren’t particularly noteworthy, that’s not the case with Brantley. Soon after the Browns used the 185th pick on the ex-Florida Gator, general manager Sashi Brown acknowledged that Brantley might not play a down for the team. At the time, Brantley was facing an assault charge for an incident that occurred in Gainesville, Fla., last month. Brantley was alleged to have punched a woman in a bar, causing dental injuries, but the charge against him was dropped Wednesday on account of “insufficient evidence,” and it turns out he was actually defending himself against an assault.

Now that he’s officially a member of the Browns, Brantley could prove to be a late-round steal for the club. Brantley had the potential to go as high as Round 2 before his legal troubles, after all, and Lance Zierlein of NFL.com wrote prior to the draft that he has the talent to become a “defensive force.”

While the initial police report documenting an April incident involving defensive tackle Caleb Brantley indicated he had knocked a a woman unconscious, new evidence has shown Brantley was in fact defending himself against an assault, tweets Ian Rapoport of NFL.com. 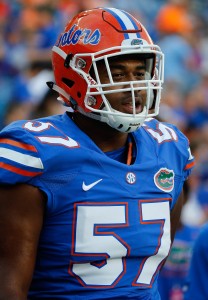 Brantley, originally viewed as a Day 2 draft pick, eventually fell to Round 6 where he was selected by the Browns. Cleveland wasn’t willing to commit to Brantley pending the results of the investigation, but given that charges against the Florida product have been dropped, Brantley now figures to stick on the Browns roster. However, NFL clubs did have other concerns about Brantley leading up to the draft, including his undersized stature and his maturity level, as Tom Pelissero of USA Today details.

“Based on our information, we understood there was a reasonable chance that the charges would be dismissed,” said executive VP of football operation Sashi Brown in a statement. “As we previously discussed, the allegations made regarding were not something we take lightly.

Caleb understands that we have an expectation and standard for every member of our organization. He’s a talented young man with a great opportunity in front of him. He is now able to move forward and focus on earning a spot on this roster.”

The battery charge against Browns rookie Caleb Brantley has been dismissed, his lawyer tells Mary Kay Cabot of Cleveland.com (Twitter link). The Florida product was alleged to have punched a woman in a bar, causing dental injuries. The charge was closed due to “insufficient evidence,” per Alachua County Court documents (Twitter link via Ian Rapoport of NFL.com).

After taking the Florida product in the sixth round, top exec Sashi Brown indicated that his time with the organization would be short lived if the charges stuck. Now, Brantley could have a much clearer path to making the 53-man roster. From a talent perspective, many evaluators viewed the defensive tackle as a first- or second-round pick. However, because of this ugly incident and other perceived character issues, many teams took him off of the board completely. One Florida coach also reportedly warned teams to steer clear of Brantley.

Back on April 13, two witnesses saw Brantley get into a verbal spat with a female patron at a bar. After the woman shoved Brantley due to “crude comments” he made, Brantley was said to have struck the woman in the face, rendering her unconscious and knocking out a tooth. Even though he’s in the clear from a legal perspective, the Browns will likely be keeping a close eye on the rookie’s off-the-field behavior from here on out.

Jabrill Peppers reported to Browns rookie minicamp but did not practice today because, as an unsigned player, the safety did not sign a participation waiver that would have allowed him to work out without a contract, Mary Kay Cabot of cleveland.com reports. Agent Todd France urged Peppers not to sign the standard participation document, per Cabot.

Peppers encountered a setback after a diluted sample at the Combine resulted in the Michigan talent failing a drug test. By not signing this waiver, Peppers can’t yet be drug tested, according to Mike Florio of Pro Football Talk, who adds this tactic is quite rare. The participation agreement goes about ensuring a player, should he get injured like Dante Fowler Jr. was two years ago during the Jaguars’ rookie minicamp, would receive the same contract he would have if an injury had not occurred. Florio notes Peppers will be in Stage 1 of the NFL’s substance-abuse program once he signs. Should Peppers fail a test on this tier of the program, he would be upgraded to Stage 2, where suspensions and the loss of game checks could loom.

Here’s more from the Cleveland area.