We have some conflicting word out of Cleveland regarding Josh Gordon. Last week, it was reported that the Browns will either trade or release Gordon if he is granted reinstatement this year. Publicly, at least, Browns executive vice president Sashi Brown is singing a different tune. 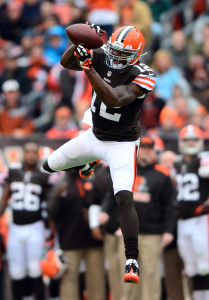 “We’re not in position at wide receiver to turn down a guy like Josh if we feel he’s settled himself,” Brown said (Twitter link via ESPN.com’s Tony Grossi).

When he’s on the field, Gordon is one of the best wide receivers in the entire NFL. Unfortunately for Cleveland, we haven’t seen him out there since the final six weeks of the 2014 season. The league reinstated Gordon last year, but the 25-year-old (26 in April) went to rehab and did not play in 2016. For now, he is banned indefinitely, but he has applied for reinstatement and his camp is hopeful about a return for 2017.

In 2013, Gordon’s last full season, he had 87 catches, a league-leading 1,646 yards, and nine touchdowns in 14 games. That’s the kind of production Cleveland could use at wide receiver, particularly after losing Terrelle Pryor in free agency. For now, the Browns have free agent pickup Kenny Britt, rising sophomores Corey Coleman and Ricardo Louis, and six others under contract at wide receiver.