Jabrill Peppers‘ torn ACL will keep him sidelined for the rest of the 2021 campaign, and considering his expiring contract, there’s a chance his stint with the Giants has effectively come to an end. However, head coach Joe Judge kept the door open when speaking with reporters on Wednesday.

“Look, this guy is in a contract year, it’s something I’ve talked to him about directly,” Judge said (h/t to Josh Alper of ProFootballTalk.com). “He’s a guy that I value a lot in this program. I’d love to have this guy going forward, I’ve told him that directly. He’s been a very good leader for us. You can talk about him being local, that the Giants mean something to him. I think that’s very important. He’s a guy that loves football, he loves this organization, he loves this area. Those are things we talk about building as cornerstones and pillars of this program and he’s a very important part of our program.”

The safety started five of his six games this season, compiling 29 tackles and one sack. Considering Peppers’ contract status, his reduced playing time, and continued trade rumblings, there was a chance the veteran would be traded prior to his injury. The ACL injury certainly changed things, and Peppers could pursue a comeback with his current team.

More notes out of the NFC East…

When we learned that the Giants were set to rework Nate Solder‘s contract, pretty much everyone expected that the team would save a small chunk of money. However, the veteran lineman’s new deal will actually see him take a significant pay cut. 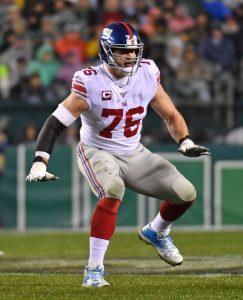 Dan Duggan of The Athletic reports (via Twitter) that Solder’s 2021 salary has been reduced from $10MM to only $3MM, leading to a $9.5MM cap charge (ultimately saving the organization $7MM). Solder’s 2022 deal was also reduced to $3MM, none of which is guaranteed, and his cap hit will drop from $18MM to $7MM. So, at the end of the day, Solder basically committed to a new two-year, $6MM deal with $3MM in guaranteed money.

Solder opted out of last season but had expressed a desire to play in 2021. The 6-foot-8 tackle was previously attached to a $16.5MM cap number after his contract tolled from 2020. Outright releasing the lineman never seemed like a logical option for the Giants, as it would have left the organization with $10.5MM in dead money.

New York signed Solder to a massive four-year, $62MM deal in 2018, and he’s been a pretty big disappointment for that hefty contract. They almost traded him in 2019, but nothing got done. While his production has gone down, Solder still started each of his 32 games between the 2018 and 2019 seasons, playing in at least 95-percent of his team’s offensive snaps per year.

There’s a chance that Solder sees mostly a backup role in 2021. The team’s rostering 2020 No. 4 overall pick Andrew Thomas, and they got some surprising production from third-round pick Matt Peart last season.

The Giants are on track to have Nate Solder back for the 2021 season. They are finalizing a reworked deal for the veteran left tackle, according to NFL.com’s Ian Rapoport (on Twitter).

Solder opted out of last season but expressed a desire to play in 2021. The 6-foot-8 tackle is attached to a $16.5MM cap number, after his contract tolled from 2020. That number will be coming down.

This process has been in the works for a bit now. Despite the Giants’ big-ticket free agency deal with Solder not working out to their liking, the former first-round pick would have cost the team $10.5MM in dead money to release. (A post-June 1 cut would have been in play as well, given the circumstances.) The team just used its franchise tag on Leonard Williams for the second straight year, and Dalvin Tomlinson remains in the picture to be re-signed. Carrying a $16.5MM cap figure for a middling tackle would be an impediment to the Giants’ free agency plans.

It will now be interesting to see how the Giants configure their offensive line. They used 2020 No. 4 overall pick Andrew Thomas at Solder’s left tackle position last season. Prior to Solder’s opt-out decision, the tentative Big Blue plan was for Thomas to begin his career at right tackle during what was expected to be Solder’s final year as a Giant. Solder played right tackle as a rookie with the Patriots but has spent the bulk of his career on the left side.

New York worked in third-round pick Matt Peart at right tackle for stretches last season; the UConn product played 15% of the Giants’ offensive snaps in 2020. It is certainly possible Peart continues to be a contributor, but Solder returning would place the second-year blocker on track to be a backup again.

The Giants cut Kevin Zeitler this week, and many people have been expecting another big name offensive lineman to follow him out the door. However, it sounds like veteran offensive tackle Nate Solder might be spared amidst the cap casualty onslaught. 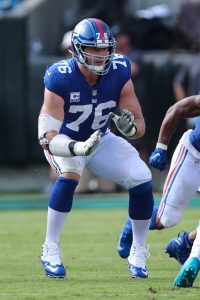 There is now optimism within the organization that Solder will play for the Giants in 2021, a source told Dan Duggan of The Athletic (Twitter link). Duggan notes that the sides are “still working out the terms,” so it sounds like Solder’s contract is going to be restructured. In all likelihood, that means Solder will be taking a pay-cut.

He had been scheduled to carry a $16.5MM cap hit for this season. New York has been needing to clear space in order to bring back guys like defensive linemen Leonard Williams and Dalvin Tomlinson, and many pointed to a Solder cut as an obvious way to save money.

The Giants are indeed talking “restructured numbers” with Solder, Ryan Dunleavy of the New York Post confirmed in a tweet. A source told Dunleavy that it never reached that point with Zeitler, meaning Zeitler was a goner from the beginning despite some speculation that he could restructure as well.

New York signed Solder to a massive four-year, $62MM deal in 2018, and he’s been a pretty big disappointment for that hefty contract. They almost traded him in 2019, but nothing got done. He opted out of the 2020 season due to COVID-19, so he still has two more years left on that deal. He confirmed in February that he’s planning on returning for the 2021 season.

Count Nate Solder among the 2020 opt-outs who will return in 2021. The Giants veteran tells ESPN.com’s Jordan Raanan (Twitter link) that he plans to play, “as long as the situation is right.”

Solder’s decision doesn’t necessarily guarantee that he’ll be back with the G-Men, however. After his 2020 commitment tolled, he’s scheduled to make $10MM and count for $16.5MM against the cap. That’s a lot of money, especially with 2020 first-round left tackle Andrew Thomas in the fold.

Instead, the Giants can trade or cut Solder outright to save $6MM against the cap. If they trade him in the summer or make him a post-June 1 release, they can spread out the dead money hit to create $10MM in breathing room this offseason. In that event, they’d have $6.5MM in dead money this year and $4MM in 2021.

The Giants signed Solder to a then-record four-year, $62MM deal in 2018. He was the centerpiece of GM Dave Gettleman‘s offensive line overhaul, but he did not live up to the contract in his first two seasons. Now, the 6-foot-8 veteran could wind up making his return elsewhere.