Jabrill Peppers is now on the Giants’ IR list, ensuring he will finish the season in New York. The team placed the fifth-year safety on IR due to knee and ankle injuries. 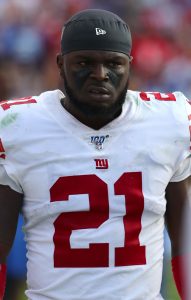 These maladies are set to sideline Peppers for the rest of this season, with the Giants announcing the veteran defender has both a ruptured ACL and a high ankle sprain. Peppers suffered the injuries on a third-quarter punt return. This is a brutal blow for the free agent-to-be.

The Giants acquired Peppers via 2019’s Odell Beckham Jr. trade and picked up his fifth-year option. His rookie contract expires at season’s end, which invited speculation about his availability ahead of next week’s trade deadline. These injuries stonewall the prospect of a Peppers trade out of New York.

Big Blue has safeties Logan Ryan and Xavier McKinney signed long-term, giving the team one of the NFL’s top back-line groups. Peppers has played 58% of the Giants’ snaps this season, the lowest participation rate out of this group. He has served as the Giants’ primary punt returner this season, however, and did register a sack during New York’s dominant win over Carolina in Week 7.

Pro Football Focus slots Peppers 56th among safeties this season, just behind McKinney. Peppers has made 30 tackles (two for loss) this season. A former first-round pick, Peppers was a full-time player for the 2019 and ’20 Giants squads. While the Michigan product should still have a market come March, his value dropped a bit since being included in the blockbuster trade two years ago and now takes a bigger hit thanks to these injuries.