Chance Warmack could be headed back to Seattle. The veteran guard is visiting with the Seahawks, sources told Jeremy Fowler of ESPN.com (Twitter link).

Fowler notes he’ll be getting a physical and that this is a “potential re-signing.” Warmack is most well-known for being the 10th overall pick of the 2013 draft by the Titans. He became an immediate starter in Tennessee but never lived up to his draft status, had his fifth-year option declined, and was allowed to walk after the 2016 season.

He spent the next two years with the Eagles as a reserve, making a few starts. He was out of football in 2019, then signed with Seattle in March of last year. He ultimately decided to opt out of 2020 due to COVID-19, and was released back in February. Now, he might end up back with the Seahawks for real. If he signs and makes the team it’ll be his first game action since 2018. He’ll turn 30 in September.

As the season wraps up the Seahawks are doing some housecleaning, and one veteran whose name will ring some bells is getting the boot from the offseason roster. Seattle has released offensive lineman Chance Warmack, Field Yates of ESPN.com tweets.

Warmack is a notable name as the tenth overall pick of the 2013 draft. He was a full-time starter his first few years in the league at right guard with the Titans, but never lived up to his draft status and flamed out quickly in Tennessee. His fifth-year option was declined, and he missed most of the 2016 season with an injury. He was with the Eagles from 2017-18 mostly as a reserve, but started a few games.

He spent 2019 out of football before signing with the Seahawks in a comeback bid back in March. Then he became one of the first players in the league to opt-out due to COVID-19 back in July, and now he’s been cut before his contract had a chance to toll to 2021. Still only 29, he won’t generate a ton of interest on the open market.

That being said he isn’t necessarily done in Seattle, as Brady Henderson of ESPN.com is told Warmack does want to play next season and a source told him the Seahawks want to bring him in for a workout to see how he looks physically after all the time away (Twitter link).

A third player will opt out of the 2020 season. Seahawks offensive lineman Chance Warmack, per NFL.com’s Mike Garafolo (on Twitter), will join Laurent Duvernay-Tardif and De’Anthony Thomas in doing so.

Although not a high-risk player, Warmack has seen people close to him contract the coronavirus, according to the Seattle Times’ Bob Condotta (on Twitter). He stands to receive a $150K stipend. His contract will toll to 2021.

This represents more change for the Seahawks’ offensive line, but Warmack was set to compete for a spot on Seattle’s roster after signing with the team this offseason. The Seahawks signed the former top-10 pick in March. He did not play last season. This would have been Warmack’s seventh NFL campaign. The former Titans draft choice played four seasons with the Titans and two with the Eagles.

The 28-year-old guard has been a starter for much of his career, opening with the Tennessee or Philadelphia first-string lines in 51 games. He was likely set to be a depth piece for the Seahawks, who have made several changes to their offensive front over the past several months. Warmack was part of this equation, but he will miss the season — one that promises to be overshadowed by the COVID-19 pandemic.

Like Thomas, Warmack runs the risk of seeing his career end as a result of this decision. Backup-level players will obviously have narrower paths back to teams next year. It stands to be easier for Duvernay-Tardif, a longtime Chiefs guard starter, to reclaim his job than it will be for marginal players to return. But Warmack will be under Seahawks contract for 2021, thanks to this decision.

Mike Garafolo of the NFL Network reports (via Twitter) that the Seahawks and guard Chance Warmack have come to terms on an agreement. Warmack, a first-round pick out of Alabama in the 2013 NFL Draft, once was one of the best young guards in the league but has only played 7 snaps over the past two seasons. The deal spans one season, according to Brady Henderson of ESPN (via Twitter).

The tenth overall selection by the Titans, Warmack immediately entered Tennessee’s starting lineup and graded as a well-above-average guard (per Pro Football Focus) for the first three seasons of his career. However, the combination of injuries and poor play quickly derailed a once-promising career.

After a difficult 2016 season, the Titans declined Warmack’s fifth-year option. When he became a free agent, the Eagles gave Warmack an opportunity, but he failed to replicate his early-career success and was relegated to backup duty. The Seahawks, whose struggles along the offensive line have been well documented, will surely give Warmack a chance to regain his old form.

Chance Warmack Hopes To Play In 2020

Chance Warmack sat out the entire 2019 season, but the veteran guard hopes to play in 2020, as Mike Garafolo of the NFL Network reports (Twitter link). Warmack has recently hired a new agent, Ron Slavin, and has several free agent visits lined up once team facilities reopen.

The Titans selected Warmack with the 10th-overall pick of the 2013 draft, and he was a full-time starter throughout his first three years in the league. Unfortunately, a hand injury limited him to just two games in 2016, and he had to settle for a modest one-year pact from the Eagles in March 2017.

But Philadelphia liked what it saw from the Alabama product in training camp and the preseason that year, and they extended him through 2018 before the 2017 regular season got underway. But Warmack appeared in only nine games in 2018, and almost all of his limited snaps came on special teams. The Eagles had hoped to trade him prior to the 2018 deadline, but they could not find any takers.

Still, Warmack was a competent starter during his early tenure with the Titans, and between that and his first-round pedigree, it’s not surprising that he has generated some interest. After all, if Alex Boone, who is older and who has been out of the league longer is getting some looks, it stands to reason that Warmack would as well. 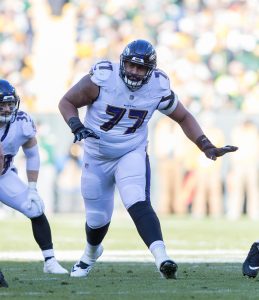 The Eagles signed Chance Warmack in March but have seen enough from the veteran lineman to extend the arrangement past 2017.

Warmack signed a one-year extension through 2018 on Saturday, the team announced. The fifth-year player figures to join Stefen Wisniewski as experienced depth on Philly’s front.

A former Titans first-round pick, Warmack signed a one-year, $1.51MM deal with the Eagles at free agency’s outset. He did so after suffering a hand injury that shelved him for all but two games in 2016. The former well-regarded Alabama prospect’s Eagles agreement profiled as a value-re-establishing pact, but it looks like both sides have enjoyed the arrangement they’ll see fit to continue it.

Although Isaac Seumalo may well open the season as the Eagles’ starting left guard, Warmack profiles as quality insurance and an option in case the second-year player falters. Warmack has started in each of the 48 games he’s played.