After eight years in the league, Torrey Smith is retiring from the NFL.

“It’s the NFL circle of life and I’m prepared for what’s next,” Smith said in a video on Uninterrupted.“…I’m blessed to be able to walk away from this game with most of my health, a clear mind, and a grateful heart. I can’t wait to begin the next phase of my life where my heart is and never left: Baltimore.”

The Ravens selected Smith out of the University of Maryland in the second round of the 2011 draft and he helped bring a Super Bowl to the club during his second season in the league. In addition to Baltimore, he’s played in San Francisco, Philadelphia, and Carolina. Smith finishes his career with 319 catches for 5,141 yards and 41 touchdowns.

The paycut that Torrey Smith accepted back in May wasn’t enough to save his job in Carolina. Per Adam Schefter of ESPN.com, the Panthers have released the veteran wideout (Twitter link).

Smith missed five games due to a knee injury in 2018 — his first and only season in Charlotte — and he appeared in 11 games in total (six starts). He was targeted just 31 times on the year, hauling in 17 of those targets for 190 yards and two touchdowns. Smith has never been a volume receiver, but he hasn’t posted more than 40 catches since 2014.

The former home run hitter, now 30, has lost a step or two over the past couple of years, and given that he never had great hands or route-running ability, losing top-end speed is especially problematic. He was squeezed out of the Panthers’ plans, but he should get another chance as a depth WR and occasional deep threat elsewhere.

He does have two Super Bowl rings, one from his 2012 season in Baltimore and another from his 2017 campaign in Philadelphia. 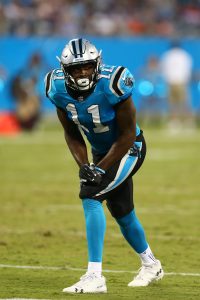 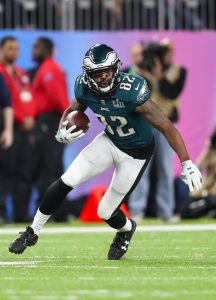 John Harbaugh confirmed the Ravens were interested in Torrey Smith last offseason, and Joe Flacco called his former deep threat while he was a free agent, Jeff Zreibec of the Baltimore Sun notes. Smith ultimately decided to sign with the Eagles, and it’s unclear what the Ravens offered (if one was made) for a reunion. Smith, who the 49ers cut prior to free agency last year, was interested in a Ravens return as well. But he didn’t recall the Ravens and his camp getting far on a deal.

“I don’t really think so. We talked, but with the way the timing was going, I kind of just had to make a decision,” Smith told Zreibec about the sides’ 2017 discussions. “For me, this time around, it wasn’t about finances at all. It was about the right situation and the right time and that’s really kind of how it’s going to probably end up being for the rest of my career.

“… Obviously, I had interest in coming back. That’s home. I have a lot of respect for everyone over there. They know that. It’s love forever. But to have the opportunity to come up here with some guys I was familiar with and to play in my wife’s hometown, that was pretty cool as well.”

However, with the now-two-time Super Bowl champion wideout a possible free agent again soon — the cap-strapped Eagles hold a team option for his $5MM 2018 wages — he may have another decision to make. And with Baltimore’s post-Smith deep threat, Mike Wallace, also a UFA, the sides could potentially revisit a reunion. Smith’s best seasons came with the Ravens, and he hasn’t come particularly close to matching his Baltimore work over the past two seasons.

Here’s the latest from some of the Ravens’ top rivals.

The Eagles have landed Torrey Smith. The veteran wide receiver will get a three-year, $15MM deal, according to Adam Schefter of ESPN.com (on Twitter). 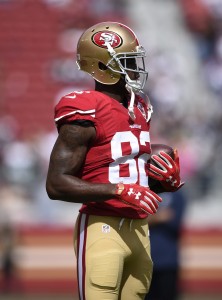 The Ravens were said to be nearing a deal to bring Smith back to Baltimore. Apparently, that fell through. Now, the Eagles have added Smith as another weapon for quarterback Carson Wentz to work with.

The Eagles have been in the market for a deep-threat wide receiver this offseason and Smith fits the bill. The bigger question now is whether they have given up on their Brandin Cooks pursuit. The Patriots are reportedly mulling a deal which would see Malcolm Butler go to New Orleans (perhaps as part of a package) in exchange for Cooks.

Smith, 28, floundered during the past two seasons in San Francisco, but he’s now heading to a much better offensive environment. The Eagles reportedly mulled a trade for Smith last season, but no agreement was ever reached. Smith, who’s averaged 17 yards per catch during his six-year career, will slot in as Philadelphia’s top pass-catcher for the 2017 campaign.

We ranked the veteran as the eighth-best available wideout.

There is “a very, very strong likelihood” of Torrey Smith signing with the Ravens, according to Jason La Canfora of CBSSports.com (on Twitter). Smith, of course, spent the first four seasons of his career in Baltimore. 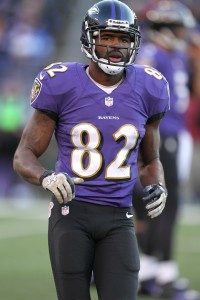 A reunion with Smith would be more than a great feel good story – it could potentially give the Ravens a replacement for Kamar Aiken if he gets away via free agency. Currently, the Ravens’ wide receiver depth chart is headlined by Mike Wallace, Breshad Perriman, and Chris Moore. Wallace could wind up as a cap casualty this spring.

While with the Ravens, Smith averaged 53 catches, 898 yards, and eight touchdowns per season. His strongest overall year came in 2013 when he caught 65 passes for 1,128 yards and four scores, but his eleven touchdown total in the following campaign was nearly as impressive.

The Niners cut Smith this week while he was in the midst of his $40MM deal. The wideout wasn’t nearly as productive in San Francisco. Smith caught 33 passes for 663 yards and four touchdowns during his first season with the 49ers, and he led the league with a 20.1 yard-per-reception mark. The veteran played in 12 games in 2016, but he finished with career-lows in receptions (20), yards (267) and touchdowns (three).

Previous reports linked Smith to both the Ravens and the Eagles. We ranked the veteran as the eighth-best available wideout.