Panthers To Meet With Gerald McCoy

Gerald McCoy is “tentatively” scheduled to meet with the Panthers this week, a source tells Jourdan Rodrigue of the Charlotte Observer (on Twitter). Carolina will host McCoy beginning on Thursday night, tweets Ian Rapoport of NFL.com. 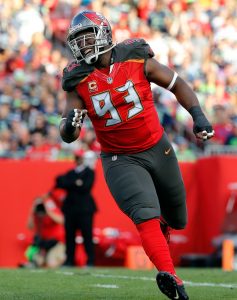 The Panthers first expressed interest in McCoy last week, and that interest “has not waned,” reports Rodrigue. A number of teams, including the Falcons, Saints, Colts, and Bengals have all reportedly at least considered a McCoy addition, but he’s only met with the Browns and Ravens thus far. Cleveland and Baltimore are McCoy’s preferred destinations, although he’s likely to be swayed by financial specifics.

While Carolina already boasts Kawann Short and Dontari Poe at defensive tackle, the club still has room for McCoy along the interior. Short and Poe each played between 50-60% of the Panthers’ defensive snaps in 2018, so McCoy could certainly fit into a rotation. McCoy would likely take playing time away from former first-round pick Vernon Butler (who’s already had his 2020 fifth-year option declined) and reserve Kyle Love.

McCoy, 31, ranked fourth among defensive tackles with 21 quarterback hits in 2018 and finished as the NFL’s No. 28 interior defender, per Pro Football Focus.

2 comments on “Panthers To Meet With Gerald McCoy”