Gerald McCoy is already out for the 2021 campaign, but that didn’t stop the NFL from handing him a suspension. The Raiders defensive tackle was slapped with a six-game ban today, reports ESPN’s Paul Gutierrez (via Twitter). 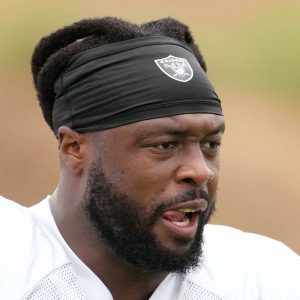 “I love the game of football and have nothing but respect for the players, fans, and this league,” McCoy said in a statement (via Twitter). “I’ve given my all to this game and worked my entire career to compete, train, and rehabilitate at a high level with integrity. It is with great disappointment that I recently learned I tested positive for a banned substance – something I was prescribed to take to help with scar tissue and tendon strength from a previous injury. In no way would I ever intentionally take anything to help with performance or gain a competitive advantage. This was an honest mistake, but it’s something I take full responsibility for. I apologize to my family, the NFL, my teammates, and the fans and ask humbly for your forgiveness.”

McCoy was already sidelined for the entire 2021 campaign after suffering a season-ending injury during Week 1. However, it sounds like McCoy was punished for using a substance that helped him rehabilitate a previous injury…perhaps the torn quad that prevented him from taking the field for the Cowboys in 2020.

McCoy earned six Pro Bowl nods with the Buccaneers and performed as one of the NFL’s best defensive lineman in the 2010s. He spent 2019 with the Panthers, appeared in all 16 games, and registered five sacks, giving him 59.5 for his career. 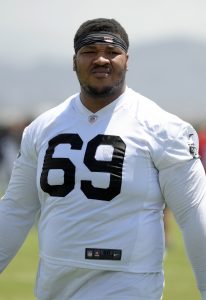 Let’s catch up on the details of some of the high-profile contracts given out recently:

Well, that was fast. Shortly after meeting with him on Wednesday afternoon, the Raiders have agreed to sign defensive tackle Gerald McCoy (Twitter link via NFL.com’s Ian Rapoport). The Raiders have since confirmed the deal via press release.

The veteran made the most of his workout, showcasing the skills that made him a star player in Tampa. McCoy earned six Pro Bowl nods with the Buccaneers and performed as one of the NFL’s best defensive lineman in the 2010s. On the flipside, he’s 33 years old, and his last Pro Bowl selection came in 2017.

McCoy found his way to the Panthers in 2019 after his Bucs release. He appeared in all 16 games, registering five sacks — making it 59.5 for his career. McCoy would join the Cowboys in March of 2020, only to see a torn quad end his season before it began.

All in all, McCoy has 139 appearances (all starts), 352 tackles, 59.5 sacks, 79 tackles for loss, 24 passes defensed, six forced fumbles, and four fumble recoveries. If he stays healthy, McCoy could have an opportunity to lead the Raiders’ experienced interior group. Jon Gruden already has Johnathan Hankins, Solomon Thomas, Quinton Jefferson, and Darius Philon on hand.

After suffering a season-ending injury in August 2020, Gerald McCoy has resurfaced on the NFL radar. The Raiders brought Pro Bowl defensive tackle in for a visit Wednesday, Field Yates of ESPN.com tweets. 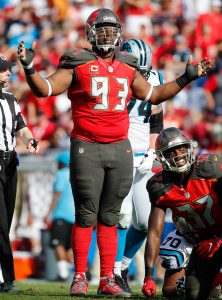 McCoy signed a one-year deal with the Cowboys in March of last year but saw a torn quad end his season during Cowboys camp. The Cowboys released McCoy, and he spent last season out of football. This marks the 10-year veteran’s first known connection to a team since that development.

While McCoy is a six-time Pro Bowler from his quality run with the Buccaneers, the last of those nods came in 2017. The former top-five pick was one of the NFL’s best defensive linemen during the 2010s, but he is now 33. Although the veteran D-tackle missed all of 2020 due to injury, he displayed durability for most of his career leading up to that point. McCoy started 16 games in Carolina in 2019 and missed just eight games from 2012-18 with Tampa Bay. And he exited his Panthers season with 59.5 career sacks.

The Raiders have a host of veteran presences at defensive tackle. They return Johnathan Hankins and added Solomon Thomas, Quinton Jefferson and Darius Philon in free agency. Las Vegas did not spend any draft choices on this position this year.

It does not appear Gerald McCoy‘s three-year Cowboys contract will make it into Year 1. Following the veteran defensive tackle’s quadriceps injury, the Cowboys are releasing him, Adam Schefter of ESPN.com tweets.

An injury waiver exists within McCoy’s deal, and Schefter adds the Cowboys are using this mechanism to release McCoy (Twitter link). While a standard release would have cost Dallas $7MM, the franchise will move off this contract and pay out just $3MM.

The former top-five pick was due $9MM in guarantees on the three-year, $18MM pact he signed in March. The Cowboys, however, are off the hook for McCoy’s $2.5MM 2020 base salary and $750K roster bonus, Michael Gehlken of the Dallas Morning News tweets. The team inserted this waiver into McCoy’s contract after determining he had a pre-existing quadriceps condition, Gehlken adds (via Twitter).

McCoy is not expected to play this season. He suffered a torn quad earlier this week. The Cowboys have been busy on their defensive line this offseason, adding Dontari Poe, Aldon Smith and Everson Griffen. But McCoy was slated to be a key player for the Cowboys this season. The team has already moved on, with the release showing up on the league’s transaction wire.

The Buccaneers released McCoy last summer, and the six-time Pro Bowler found his way to the Panthers. McCoy played in 16 games last season, registering five sacks to give him 59.5 for his career. His best hope of adding to this total will be a return to health in advance of his age-33 season in 2021.

A torn quadriceps muscle will rule out Cowboys defensive tackle Gerald McCoy for the year, per an announcement from the team. The injury was initially feared to be an ACL tear, but the end result is the same.

The Cowboys inked McCoy to a three-year, ~$20MM deal in March. Even though it was a lot less than McCoy’s massive Bucs deal, it was still a significant layout for Dallas. For the 32-year-old, it was an opportunity to win in the twilight of his career.

McCoy was set to join forces with DeMarcus Lawrence and Tyrone Crawford on Dallas’ D-Line, helping to fill the void left by the departures of Robert Quinn and Maliek Collins. Now, he’ll have to wait until next year to make his Dallas debut.