The Panthers announced that they have declined their fifth-year option on defensive tackle Vernon Butler. The former first-round pick is now slated for unrestricted free agency after the 2019 season. 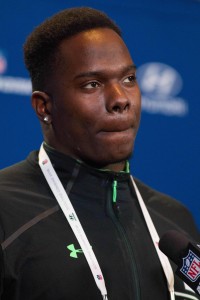 The Panthers picked up the fifth-year option of every first round pick from Cam Newton (2011 draft) all the way through 2015. Today, that streak ends with Butler’s extra year being turned down.

Butler was drafted No. 30 overall under the Dave Gettleman administration. The Panthers had high hopes for the Louisiana Tech product, but he’s amassed just 45 tackles and two sacks as a bench player over the last three years. And, last year, Butler was a healthy scratch for two straight games. In short – the decision to turn down Butler’s additional year was widely expected.

NFL teams have until Friday to make the call on the fifth-year options for 2016 first-round picks, but most clubs have already made their decisions.