Linebacker Derrick Johnson is retiring from football, according to 610 Sports Radio. But, before he officially hangs ’em up, he’ll sign a one-day contract to go out as as member of the Chiefs. 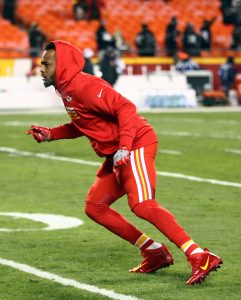 Johnson, 36, was a key cog in the Chiefs’ defense from 2005 through 2017. He leaves the game as the Chiefs’ all-time leading tackler, with 1,262 career stops to his credit. Since entering the league as a first round pick, Johnson suited up in 182 games for Kansas City with 169 starts. In 2018, the Chiefs made the difficult decision to allow Johnson to leave in free agency.

“Few players in recent history have meant more to the Chiefs franchise and the Kansas City community than Derrick Johnson,” Chiefs Chairman and CEO Clark Hunt said in a statement last year. “His tireless work ethic and passion for the game made him one of the most productive defensive players to ever wear a Chiefs uniform and one of the most respected players both in our locker room and around the league. Over the last 13 seasons, Derrick represented himself and the Chiefs organization with integrity and class, and he will always be a part of our Chiefs family.”

After that, Johnson hooked on with the Raiders, but his second act didn’t go as planned. Johnson appeared in six games (one start) for the silver and black, amassing just 17 tackles. In October, the Raiders granted his request for release, but he did not sign with another club in the 2018 season.

Johnson’s one-day deal comes on the heels of running back Jamaal Charles‘ own ceremonial contract to retire as a member of the Chiefs.