The Bills are cutting Star Lotulelei (Twitter link via NFL.com’s Mike Garafolo). The two sides were discussing a revamped contract that would have enabled him to return, but all parties agreed that a fresh start would be best.

Lotulelei, 33 in December, was in the midst of the five-year, $50MM deal he signed in 2018. He exercised his right to opt out of the 2020 season due to COVID concerns, which tolled his contract and would have had him under Buffalo’s control through 2023.

The eight-year veteran had three sacks in 2021, bringing his career total to 16.5. He’s been a quality disruptor in the past, particularly with the Panthers, but the advanced metrics at Pro Football Focus haven’t been high on his work in quite some time. This past year, Lotulelei graded as Bills’ lowest performing run defender on the D-Line.

Lotulelei was slated to carry a $9.2MM cap charge this year. Instead, the Bills will save at least $1.5MM against the cap by cutting him. They could also choose to save $4.1MM this year if they use the post-June 1 designation.

All in all, Lotulelei leaves Buffalo after 43 appearances (40 starts) with five sacks, one interception, and 53 tackles.

Per a team announcement, the Bills have placed DT Star Lotulelei on the reserve/COVID-19 list, thereby rendering him ineligible for today’s game against the Jets. Fellow DT Brandin Bryant has been elevated from the taxi squad to take Lotulelei’s place on the active roster, as Joe Buscaglia of The Athletic tweets.

Lotulelei, who will turn 32 next month, is in the midst of a five-year, $50MM deal he signed in 2018. He exercised his right to opt out of the 2020 season due to COVID concerns, which tolled his contract and keeps him under club control through 2023. He landed on the reserve/COVID-19 list in August, but he returned for Buffalo’s Week 2 win over Miami and has started each of his seven games this season.

Pro Football Focus’ advanced metrics have not been high on Lotulelei’s work in some time, and that trend has continued this year. Though his 66.8 pass rush grade is above average — he does have two sacks this year, which matches his 16-game total in 2019 — his overall mark of 53.1 positions him as the 86th-best interior defender out of 124 qualifiers. Still, he typically plays the most snaps in Buffalo’s D-line rotation, so his absence will be noticed.

As Michael David Smith of Pro Football Talk observes, it is believed that Lotulelei is unvaccinated. That is because the 2013 first-rounder previously needed to isolate for five days following a close contact with a person who tested positive for COVID-19, something that only an unvaccinated player would be required to do.

There is some good news to pass along for Bills fans. As Adam Schefter of ESPN.com tweets, RB Zack Moss, who suffered a concussion in last week’s loss to the Jaguars, has cleared protocols and will be able to play this afternoon. Moss and Devin Singletary have shared RB duties this year, but Singletary has been the better performer from a YPC perspective. Moss has mustered just 3.6 yards per carry on 65 attempts, while Singletary has posted a strong 4.9 YPC mark on 73 carries.

Moss, however, has been more effective as a receiver out of the backfield, catching 18 balls for 166 yards and a score.

In the midst of the initial free agency frenzy, Star Lotulelei informed the Bills that he plans to return in 2021 (Twitter link via Matthew Fairburn of The Athletic). The defensive tackle opted-out of the 2020 season due to the COVID-19 pandemic.

Lotulelei inked a five year, $50MM free agent deal with the Bills in 2018. The deal yielded mixed reactions and mixed results. The former first-round pick has largely declined since his strong rookie year in Carolina. Although he started for the Bills in 2018 and 2019, the advanced metrics at Pro Football Focus weren’t high on his performance. In ’19, Lotulelei was on the field for 516 snaps and recorded two sacks from the interior.

Still, Lotulelei can help the Bills’ run defense, which was one of their weak spots in 2020.

The hits just keep on coming. Bills defensive tackle Star Lotulelei will opt out of the 2020 season, according to Mike Garafolo of NFL.com (on Twitter).

Lotulelei has been in the Bills’ starting lineup for each of the past two seasons. Pro Football Focus hasn’t been high on the veteran, but he was set to return as a first-stringer in 2020. In 2019, Lotulelei was on the field for 516 snaps and recorded two sacks from the interior.

The former Panthers first-round pick may be swapped out for another ex-Panther. Vernon Butler, who joined the club earlier this year, could be the next man up. There’s also former Seahawks lineman Quinton Jefferson on hand – one of those two players may wind up as Ed Oliver‘s partner in the middle.

Upwards of 20 NFL players have opted out of the 2020 season, as of this writing. The Patriots have arguably been hit the hardest, with six opt outs including linebacker Dont’a Hightower, offensive tackle Marcus Cannon, and safety Patrick Chung.

Star Lotulelei signed a lucrative deal with the Bills in 2018. The veteran defensive tackle agreed Tuesday to restructure it.

The former Panthers first-round pick will see a $1.75MM reduction in his 2020 base salary in exchange for that figure — now set to be $4.50MM — becoming fully guaranteed, Field Yates of ESPN.com tweets. This will essentially ensure Lotulelei remains with the Bills this season.

The sides also agreed on additional guarantees for the 2021 season. Lotulelei will receive an extra $2.5MM in injury guarantees for next year. His contract, which previously contained no guaranteed money beyond 2019, runs through the 2022 season. It will still tag the Bills with more than $5MM in dead money to release Lotulelei in 2021.

The Bills have used Lotulelei as a starter in each of the past two seasons, and even though Pro Football Focus has not viewed the nose tackle as particularly productive, the team has him stationed as one of its top 2020 cap figures. Lotulelei played 516 snaps this past season, recording two sacks.

Buffalo stands to gain minimally from this restructure, but the team is not exactly hurting for cap space. The Bills entered Tuesday projected to hold just more than $80MM in 2020 cap room.

The Bills have agreed to a five-year deal with free agent defensive tackle Star Lotulelei, according to Adam Schefter of ESPN.com (Twitter link). 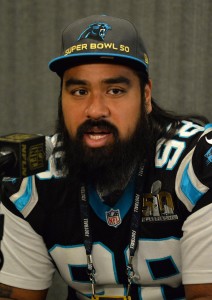 Although he’s a former first-round pick, Lotulelei’s performance has slipped in every season since he entered the league in 2013. Last year, the 28-year-old appeared in all 16 games for the second consecutive season but managed only six tackles while grading as a bottom-15 interior defender, per Pro Football Focus.

Buffalo, meanwhile, clearly needs help on the interior of its defensive line after ranking just 21st in adjusted line yards a season ago. The Bills shipped malcontent defensive tackle Marcell Dareus to the Jaguars at midseason, while veteran Kyle Williams is now a free agent.

The Panthers, Lotulelei’s former squad, are already heavily invested at the defensive tackle position. Kawann Short is the NFL’s third-highest-paid defensive tackle with a $16.1MM annual salary, while the Panthers used a first-round pick on Vernon Butler in 2016. Veteran Kyle Loveis also under contract for the 2018 campaign.

Before signing with the Bills, Lotulelei also reportedly drew interest from the Chiefs and Texans. Lotulelei ranked as PFR’s No. 4 free agent interior defender.