The Broncos will sign linebacker Nigel Bradham to their practice squad, as Adam Schefter of ESPN.com tweets. The 31-year-old will provide depth for an inexperienced LB group in Denver.

Bradham, 31, was a four-year starter for the Eagles. He’s got 96 NFL starts to his credit, having played as a full-time starter in seven of his eight NFL seasons. He has two 100-tackle seasons on his resume and registered 97 in 2018. Last season, however, he only played in 12 games. The Eagles dropped Bradham to save money in this past offseason, and the Saints released him before the final cut.

Despite his age, and his injury-shortened 2019 season, there’s reason to believe that Bradham can be a worthwhile contributor. The veteran graded as a top-35 linebacker, per Pro Football Focus, in three of his four seasons in Philly — including the Eagles’ 2017 Super Bowl slate.

After dropping Todd Davis prior to the season opener, the Broncos have deployed Alexander Johnson and Josey Jewell as their three-down linebackers. Mark Barron, a late-summer pickup, has yet to play and remains on injured reserve.

The Broncos are considering an experienced linebacker to add to an injury-ravaged roster. They have scheduled a Nigel Bradham visit, Field Yates of ESPN.com tweets. 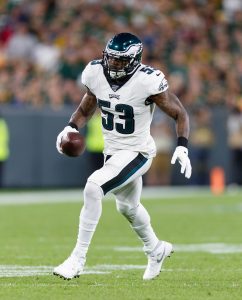 Following a brief Saints stay, Bradham has been back in free agency for a month. The eight-year veteran, however, brings more experience as a starter than any of the Broncos’ linebackers. Denver released Todd Davis prior to Week 1.

Bradham, who turned 31 last month, started four seasons with the Eagles. The Broncos have used Alexander Johnson and Josey Jewell as their three-down linebackers. Mark Barron, a late-summer acquisition, has not made his Denver debut. The veteran currently resides on IR.

Bradham has 96 NFL starts to his credit, having operated as a full-time first-stringer in seven of his eight NFL seasons. He has two 100-tackle seasons on his resume and registered 97 in 2018. Last season, he only played in 12 games. The Eagles made Bradham a cap casualty earlier this year, and the Saints released him in late August.

The Saints will release linebacker Nigel Bradham, according to Adam Schefter of ESPN.com (on Twitter). The longtime Eagles linebacker joined the team just one month ago.

Bradham, 31 in September, played at least 900 defensive snaps from 2016-18 but logged just 717 last year as he battled an ankle injury. The veteran graded as a top-35 linebacker, per Pro Football Focus, in three of his four seasons in Philly, including the Eagles’ 2017 Super Bowl slate.

Instead of a reunion with former Eagles teammate Malcolm Jenkins, Bradham finds himself on the job hunt all over again with just a few weeks to go before the start of the season. The Saints, meanwhile, seem poised to move ahead with their current linebacker group, led by Demario Davis, Kiko Alonso, and Alex Anzalone. New Orleans lost A.J. Klein in free agency but used a third-round pick on Wisconsin’s Zack Baun, who worked as both an off-ball defender and a pass rusher for the Big Ten program.

All in all, Bradham appeared in 58 regular season games for the Eagles – all starts. He’s been first-string throughout his career, pretty much, save for his 2013 season with the Bills. He finished out 2019 with 61 total stops, one interception, and five passes defensed.

Earlier this week, the Eagles informed Nigel Bradham that they would not exercise his 2020 option. The next day, they released him outright.

The Eagles changed their plans due to a recent change in the compensatory pick formula, Mike Garafolo of NFL.com (on Twitter) hears. Under the previous system, a player with a declined team option would count as a compensatory free agent for the club. This change, first reported by Over The Cap’s Brad Spielberger (via Twitter), was only just relayed to the Eagles this week.

The Broncos benefitted from the option trick in 2017, when they declined his team option and scored a third-round comp pick in 2018. It’s a seemingly minor revision to the rule, but it could nudge teams towards keeping players or, as was the case with the Eagles and Bradham, allowing those players to reach free agency before the start of the league year.

The Eagles are moving on from linebacker Nigel Bradham, as Adam Schefter of ESPN.com tweets. By declining his option, they’ll make him a free agent in mid-March.

After spending his first four seasons with the Bills, Bradham joined the Eagles as a free agent in 2016. That first deal – two years at $7MM – proved to be a tremendous value. After that, he was re-upped on a five-year, $40MM deal that delivered mix results. And, thanks to a one-game suspension for aggravated assault, Bradham’s $14MM in guarantees were wiped out.

Bradham did not perform up to his usual standards in 2019 and he was limited to just 12 games. Over the last four years, he’s started in all 58 of his games for the Birds, notching 348 tackles along the way.

Had he stayed, Bradham would have counted for $9.7MM against the salary cap. Instead, they’ll save roughly $4.5MM.

Given his history with the team, it’s possible that he could return on a cheaper deal, but the Eagles will prioritize other linebacker options in the interim. Bradham surely would have liked to play out the remainder of his $40MM contract, but they’ve at least done him a solid by giving him advanced notice.

Bradham, turns 31 in September, just before the start of what would be his ninth career season as a pro.