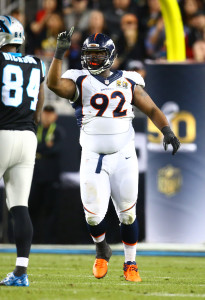 Sylvester Williams will head back to an AFC West team. The former Broncos first-round pick agreed to terms with the Chargers, according to his agency (Twitter link). Williams worked out for the Chargers this week, per Aaron Wilson of the Houston Chronicle (on Twitter).

While the 2013 No. 28 overall selection has not quite lived up to that billing, he has continued to receive calls from defensive tackle-seeking teams. Williams has played for the Titans, Lions and Dolphins since leaving Denver. The Saints rostered him briefly this summer.

Williams worked out for the Bears this week, according to Sirius XM Radio’s Adam Caplan (on Twitter), but the Chargers ended up adding him. The Chargers worked out defensive lineman Adolphus Washington, ex-Raider starter Justin Ellis and P.J. Johnson but are going with Williams.

The 30-year-old lineman started four games for the Lions last season and 11 for the 2017 Titans. In Denver, Williams started 48 games and was a first-stringer in two Super Bowls.

Both starting defensive tackles, Brandon Mebane and Justin Jones, missed Sunday’s game due to injuries — two of many maladies to affect the Chargers’ starting lineup this season. The Bolts now have seven defensive tackles on their 53-man roster, including two rookies and recently signed T.Y. McGill. It’s possible the Williams move will precede another at this position.

The Saints will move on from one of their mid-offseason defensive additions. They will release veteran defensive tackle Sylvester Williams, Nick Underhill of The Athletic tweets.

Williams has bounced around since his four-year Broncos tenure concluded after the 2016 season. The former first-round pick played for the Titans in 2017 and split time with the Lions and Dolphins last season.

The 30-year-old defender played 376 snaps in 2018, starting four games with the Lions and playing 14 total in Detroit and Miami. His last full-season starter role came with the Broncos in 2016. The Titans used Williams as an 11-game starter in their 3-4 defense.

Williams marks the second veteran inside defender the Saints moved on from today. They also released Ziggy Hood, whom they signed just ahead of training camp. Hood was last a full-time player with the 2017 Redskins, with whom he was a 13-game starter.

The Saints have signed defensive tackle Sylvester Williams, according to a team announcement. The former first-round pick auditioned for the Saints way back in October and showed enough during this month’s rookie minicamp to earn a deal.

Williams was an All-American at North Carolina, which helped him become a first round pick of the Broncos back in 2013. Williams spent the first four years of his career with Denver, but didn’t have his fifth-year option picked up. He signed a three-year pact with the Titans, but was released after just one year. After stops in Detroit and Miami, he’ll try to get back on track in New Orleans.

Between Miami and Detroit, Williams appeared in 14 games last season, including four starts. He’s managed to be a decent run-stuffer in the past, and is still only 30. The Saints had one of the league’s best defensive lines and run defenses last year, but standout defensive tackle Sheldon Rankins tore his Achilles right at the end of the year, so Williams could offer some value as a depth addition.