Following Jake Butt‘s season-ending ACL injury, the Broncos have added another tight end to their roster. Nicki Jhabvala of The Athletic reports (via Twitter) that the team has promoted Brian Parker to the active roster. To make room on the roster, the Broncos are expected to place Butt on the injured reserve (via Mike Klis of 9News on Twitter). 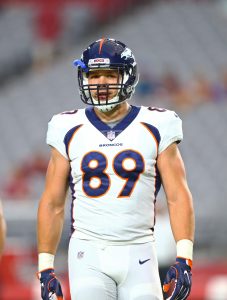 The 26-year-old Parker entered the league as an undrafted free agent out of Albany in 2015. He bounced between the Chargers, Chiefs, and Jets before landing with the Broncos in 2017. He played in nine games with Kansas City as a rookie, hauling in a single catch for six yards. He’ll likely slide behind Jeff Heuerman and Matt LaCosse on the tight ends depth chart.

It was expected that Butt would be placed on the injured reserve after he suffered a torn left ACL during Thursday’s practice. The 23-year-old had already suffered a pair of ACL’s during his playing career, although his recent injury was in a different knee.

“I made a cut and I knew it right away,” Butt told Klis (via Twitter). “But I feel lucky. I have so many wonderful people around me for support. I’ve had so many people reach out to me and tell me they’re praying for me and thinking of me. I’m so blessed.”

Butt also told Klis that he’s prepared for the grind of rehab, noting that being unable to play in games is the toughest aspect of the recovery process.