The Colts opened a roster spot today after releasing defensive tackle Caraun Reid. Well, it sounds like they’ve already filled that opening, as IndySportsCentral.com’s Mike Chappell reports (via Twitter) that the team has signed defensive back Robenson Therezie. 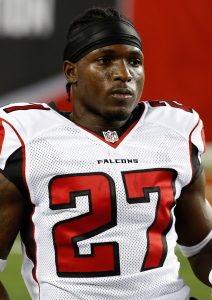 Back in 2015, it looked like the Falcons had found a diamond in the rough after signing the undrafted free agent out of Auburn. Therezie finished his rookie campaign with 33 tackles, two passes defended, and one interception in 13 games (two starts). His role was diminished in 2016, and he’s failed to make a regular season appearance over the past two years. During that span, he’s had stints with the Saints, Jets, and Bengals.

The five-foot-nine, 212-pound safety will probably have a tough time making the Colts roster, and it has nothing to do with the fact that he’ll instantly be the team’s shortest defensive back. Rather, the Colts are already rostering five other safeties in Malik Hooker, Matthias Farley, T.J. Green, Clayton Geathers, and Ronald Martin.