“It was just so familiar,” Gates said. “Even the players had, like, similarities if that makes sense. It’s just crazy how everything works. It did look familiar and when they called plays, it just fit what we had done over the course of a decade in California.”

Considering that connection, it was natural for some to wonder if the 39-year-old would finally land in Indy to team up with his former quarterback, Philip Rivers, in 2020. However, Gates made it clear that he isn’t planning on ending his retirement.

“No, no, no,” Gates said. “Last year, I was fresh out. I was hesitant about coming back, but I always wanted to keep open the opportunity of winning a championship. I really, truly feel like the Colts have that opportunity now with Philip. But for me, I can’t be who I was, from a mental standpoint. That’s why I retired. What I would have to go through mentally and the things I’d do to prepare, I just don’t feel like I can give that effort right now. I wouldn’t want to do that to anybody.”

Let’s check out some more notes out of Indy:

Antonio Gates is calling it a career. On Tuesday, the Chargers legend announced his retirement from the NFL. 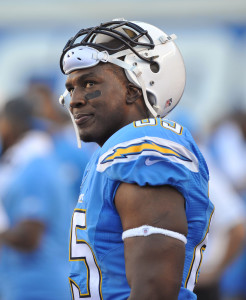 “I never dreamed that I would play this game of football so long or how fortunate I would be to play it with just one organization,” the tight end said. “I want to thank the Chargers organization, the National Football League, Dean Spanos and the Spanos family for the opportunity to live out a dream and play the game I love.”

Gates, 39, did not suit up last year. Before that, he spent 16 straight seasons with the Chargers and built a reputation as one of the league’s most dangerous tight ends.

Gates was a star on Kent State’s basketball team, but did not play football in college. When scouts told him he was too small to play power forward in the NBA, the 6’4″ athlete set his sights on the NFL. The Chargers signed him as as undrafted free agent in 2003 and he managed to go from third-stringer to starter as a rookie.

After tallying 955 receptions, 11,841 yards, and 116 touchdowns, Gates is walking away from the sport. He’ll become eligible for the Pro Football Hall of Fame in 2023 and, in all likelihood, enter Canton as a first-ballot nominee.

The Chargers have had private talks with Antonio Gates about his status, GM Tom Telesco tells reporters (Twitter link via Eric D. Williams of ESPN.com). Williams’ read on the comments is that Gates will not be back, which makes sense since we have not heard much about the 39-year-old in recent months.

The Chargers brought Gates back for a 16th season after losing Hunter Henry to a season-ending injury, but they no longer have a dire need for tight end help. Barring something unforeseen, it sounds like they’ll finally move on from the eight-time Pro Bowler.

Last year, the Chargers were ready to move on from Antonio Gates and turn the keys over to rising star Hunter Henry. However, when a torn ACL sidelined Henry, the Bolts reverted to Gates with a new deal in September. Will he come back for yet another season?

“My heart says, yeah, he’ll be back next year,” Chargers General Manager Tom Telesco said, via Sam Fortier of The Athletic. “But you put your GM hat on, and you look at what’s the role, where are resources are with the cap. We’ll come to that conclusion a lot quicker than we did last year.”

It’s hard to see Gates demanding much in the way of salary given his decline in usage and performance. Last year, even without Henry in his way, Gates finished out with just 28 catches for 333 yards and two touchdowns. Those are respectable numbers for your average tight end, but they were some of the lowest totals of Gates’ career.

Last year, Gates carried a $2.5MM charge against the Chargers’ cap. A similar deal could probably be struck, though the Bolts may want to keep the guaranteed base salary to a minimum in order to preserve their flexibility in the first couple of waves of free agency.

For his part, Gates wants to return. He’s also confident in his abilities, despite his advanced age.

“The teams we played think I can still can play if they’re still doubling me,” Gates said.

The Dolphins are entering a complete rebuild in 2019, with a new head coach, new front office head, and likely a new quarterback. New GM Chris Grier is continuing to make moves, as he’s bringing in Bills national scout Marvin Allen to be his new assistant GM, according to Adam Schefter of ESPN.com (Twitter link). It’s the latest in a series of coaching and front office swaps teams have made in the AFC East, with Adam Gase going from the Dolphins to the Jets, Brian Flores going from the Patriots to the Dolphins etc.

Schefter writes that Grier and Allen “have a strong relationship.” The Dolphins have perhaps the most unclear path forward of any team in the NFL with a ton of uncertainty, so Grier and Allen will have their work cut out for them. Armando Salguero of The Miami Herald chimed in with a tweet to say that Allen was “widely respected” and a “very good evaluator.” 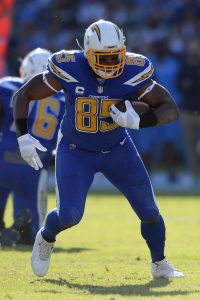 The Chargers could be without star defensive end Joey Bosa on Sunday as he deals with an ongoing foot issue, head coach Anthony Lynn told reporters, including Jack Wang of the Orange County Register. “It’s a possibility that he might not be with us,” Lynn said. “You know, we’re hopeful, but it’s possible…Foot injuries, they take on all the body weight.” Bosa hasn’t fully practiced in over a month, and Los Angeles likely doesn’t want to risk the health of its best defensive player, even though it’ll be facing a divisional opponent in the Chiefs. The Chargers, who will also be missing suspended defensive tackle Corey Liuget, would deploy second-year pro Isaac Rochell in Bosa’s stead, while Chris Landrum and second-round rookie Uchenna Nwosu could also see snaps.

The Chargers and Antonio Gates are getting back together. Adam Schefter of ESPN.com tweets that the Bolts and the future Hall-of-Famer have agreed to a deal that will allow Gates to return to LA. Tom Pelissero of the NFL Network adds (via Twitter) that the pact includes some reachable incentives to make it worth Gates’ while.

After young tight end Hunter Henry went down with a torn ACL in May, the Chargers, who had previously told Gates that he would not be re-signed for a 16th season with the club, reconsidered their position. The two sides have been in contact over the past several months, and while the Chargers had hoped to have Gates in the fold before training camp, they were finally able to get a deal done today.

The 38-year-old is coming off a career-low 316 receiving yards, but the rapport between him and quarterback Philip Rivers cannot be understated. And while Gates is obviously not the same player he was in his prime, he still represents a credible receiving threat at the tight end position, which the playoff-hopeful Chargers desperately needed. Although the club has plenty of talent at the wide receiver and running back positions, having a security blanket like Gates will help the offense reach its full potential.

Gates’ accomplishments in the league are well-known. The former basketball star has amassed over 11,500 receiving yards, third-highest among tight ends in league history, to go along with 114 touchdowns, three First Team All-Pro bids, and eight Pro Bowls.

The Chargers are still hopeful that Henry could return late in the season, and if he does, that will make the team all the more threatening down the stretch and potentially into the postseason.