The ownership squabble in Denver has begun to point to a Broncos sale, and prospective bidders made the trustees presently in charge aware true offers should materialize.

The three-person Pat Bowlen Trust has received offers for the franchise over the past few months, Daniel Kaplan of The Athletic reports (subscription required). While the offers cannot currently be entertained, Kaplan adds potential buyers contacted the trustees to let them know there will be extensive outside interest in acquiring the franchise. The Bowlen family has owned the Broncos since 1984, but recent events may lead to the franchise being put up for sale.

After the trial that was meant to clarify and finalize Bowlen’s estate (including future ownership of the Broncos) ended up being vacated this week, the future of the franchise is in flux. Two of Pat Bowlen‘s daughters from a previous marriage, Beth Bowlen Wallace and Amie Klemmer, filed suit challenging their father’s mental capacity to approve the trust. Pat Bowlen died of Alzheimer’s in 2019. Brittany Bowlen, the Hall of Fame owner’s youngest daughter, has received support from the trust to one day take over running the Broncos. Members of the league office are believed to be in favor of this path, and the 31-year-old Broncos staffer has confirmed her interest in becoming the team’s controlling owner as well. But multiple other Pat Bowlen heirs have contested this plan.

The trial to settle this matter being delayed indefinitely may mean a settlement has already been reached. Bowlen Wallace said she and Klemmer would walk away from a trial if the Broncos were put up for sale, so this week’s development would point to that being in the cards. A sale may not be imminent, however.

A strong chance exists the NFL will intervene and return the Bowlen-family squabble to arbitration, where it resided before Klemmer and Bowlen Wallace’s lawsuit, Kaplan adds. The NFL intervened recently in a Chargers ownership matter. The late owner’s widow, Annabelle, also has Alzheimer’s. Her death would lead to Pat’s seven children, from different marriages, possessing equal control of the franchise. The trust dictates the Bowlen children sign off on an ownership plan, and the NFL requires franchises have a sole decision-maker for league-related matters.

If the Broncos do become available, Kaplan notes a decades-old agreement may come into play. Previous owner Edgar Kaiser‘s estate claims Pat Bowlen gave Kaiser the right of first refusal in case the team went up for sale again. That would complicate bidding this time around. The Panthers sold for $2.275 billion in 2018; the Broncos, per Kaplan, would likely to go for more than $3 billion.

Bill Bowlen‘s lawsuit attempting to remove Broncos CEO Joe Ellis and his fellow trustees from the Pat Bowlen trust has been dismissed in its entirety, per Adam Schefter of ESPN.com (on Twitter). This resolution paves the way for Pat Bowlen’s ownership succession plans to go into effect. 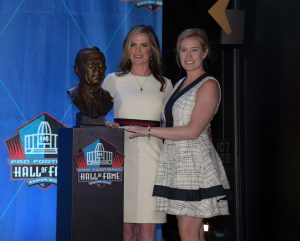 As those who have been following this situation know by now, Broncos owner Pat Bowlen, who passed away in June, ceded control of the club to three trustees during his battle with Alzheimer’s, and the trustees were vested with the power to transfer the team to one of Pat Bowlen’s seven children — when the time is right, and assuming at least one child satisfies his requirements for ownership — or to sell the team if the trustees believe doing so is in the club’s best interest.

For some time now, it has appeared that 29-year-old Brittany Bowlen is the favorite to ultimately take the reins. But not long after her status as the frontrunner became clear, Beth Bowlen Wallace went public with her desire to own the Broncos, though Ellis said the trust believed Bowlen Wallace was not qualified for ownership.

Bill Bowlen, Pat Bowlen’s brother, then filed his suit to remove the trustees, and as Mike Florio of Pro Football Talk notes, the Broncos believe that Bill Bowlen was acting on behalf of Bowlen Wallace and another sister, Amie Klemmer.

Florio, in confirming Schefter’s report, also says the battle is not quite over. After Bill Bowlen filed the suit, the Broncos initiated an arbitration proceeding under the theory that the matter falls within the NFL’s purview. Bill Bowlen had resisted arbitration since filing suit, but now it is his last hope.

The Broncos, though, believe that they will prevail in arbitration, and Florio says they’re probably right. So for right now, it seems as if Brittany Bowlen will, sooner or later, become the team’s controlling owner.