Doug Martin is slated to reach free agency in the spring, but Raiders head coach Jon Gruden would like to keep him from the open market. This week, Gruden indicated that he is hoping to keep the running back in 2019. 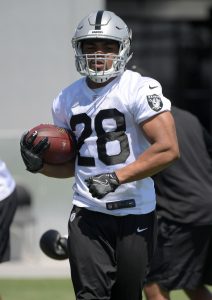 “He’s a good back. I think I’ll say it again and again, he’s a very good player,” Gruden said (via Scott Bair of NBC Sports Bay Area). “He’s been a great player in this league. He’s running it. He’s catching it. He picked up some blitz that were flushed. We did a lot of good things on the film that I look at. We’re proud of what we did against a very good defense. We thought Doug Martin played extremely well.”

Martin, an Oakland native, joined the Raiders on a one-year deal that can be worth up to $1.475MM. Despite his inconsistent past, he could be in line for a pay bump thanks to his recent play. Since taking over for the injured Marshawn Lynch, Martin has averaged 4.6 yards per tote. His latest quality performance came on Sunday as he rushed for 51 yards and a touchdown off of eleven carries.

Beast Mode is also ticketed for free agency but it’s not clear whether Gruden & Co. want him back. Meanwhile, backup Jalen Richard will be a restricted free agent.