Clay Matthews will be returning to southern California. The USC product and longtime Packer linebacker will sign with the Rams, Ian Rapoport of NFL.com tweets. Via some uniform art, Matthews confirmed his decision (on Twitter). 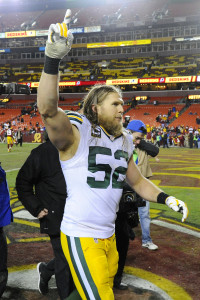 The Rams and Matthews agreed on a two-year deal, Adam Schefter of ESPN.com tweets. This deal will max out at $16.75MM, according to NFL.com’s Mike Garafolo (on Twitter). While it’s unlikely Matthews’ base salary surpasses $8MM, Ian Rapoport notes he was one of the Rams’ top free agency targets (Twitter link). With one of the linebacker’s homes located within minutes of the Rams’ training facility in Thousand Oaks, Calif., this seems like a convenient landing for the free agent sack artist.

More lucrative offers came Matthews’ way, per Garafolo, who adds staying close to home was a priority for the 11th-year linebacker. After entering last season with significant issues at outside linebacker, the Rams now have Matthews and Dante Fowler early in this offseason.

Matthews finished last season with a career-low 3.5 sacks. He saw his Packers job essentially given to younger pass rushers, with Green Bay replacing its Matthews-Nick Perry setup and going with a Preston Smith–Za’Darius Smith combination. Rams rumors emerged last week, and the soon-to-be 33-year-old edge rusher is set to be a key part of Los Angeles’ pass rush.

The former USC Trojan and L.A.-area high school standout went on to record 83.5 sacks with the Packers, en route to six Pro Bowls. While those honors came between 2009-15, the Packers’ all-time sack leader working as a pass-rush specialist in L.A. would be interesting. Matthews, who collected a Super Bowl ring eight years ago, follows Eric Weddle to the defending NFC champions’ defense.