Dolphins Likely To Move On From Ryan Tannehill

Miami seems ready to end the Ryan Tannehill era. The Dolphins are preparing to move on from the quarterback this offseason rather than paying out the $19MM he’s owed over the next two years, Barry Jackson of the Miami Herald hears. 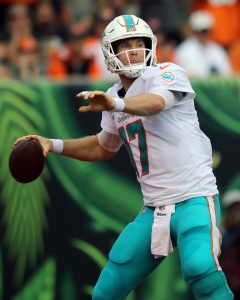 Tannehill has been less than stellar in Miami, but he hasn’t had great support from his offensive line either. The Dolphins will endeavor to fix the front five, but they apparently believe that they can do better under center.

By cutting or trading the QB, the Dolphins would open up $13.2MM in cap space. Alternatively, they could clear out $18.7MM in savings by making him a post-June 1 cut, but that would come with the downside of another dead money hit in 2020.

Even as the Dolphins ponder their next big move at quarterback, they also recognize that Tannehill has had some strong individual performances. Through 16 weeks, the Dolphins have taken 48 sacks, which ranks as the sixth most in the NFL. Tannehill is undoubtedly frustrated about the circumstances around him, but he is choosing not to dwell on outside factors.

“You can’t look at the game that way. You have to control what you can control,” Tannehill said. “If you play the what if games you’re not going to be growing as a person and a player.”

20 comments on “Dolphins Likely To Move On From Ryan Tannehill”