The Chargers are expected to retain Shane Steichen as their offensive coordinator, according to Ian Rapoport of NFL.com (Twitter link). They’ll first have to negotiate a new deal with him, however, as his contract is set to expire. 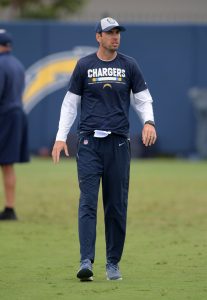 Steichen was elevated from quarterbacks coach to offensive play caller after the firing of Ken Whisenhunt in October. The Chargers’ offense improved somewhat under Stiechen’s guidance and the ground game went from pitiful to decent. Still, they went just 2-6 in the second half versus 3-5 in the first half of the season.

The Chargers believe that Steichen can do better this time around. The front office will have upwards of $55MM to spend in March and the No. 6 overall pick in April as they look to fortify the offense.