Rams To Move On From DC Wade Phillips 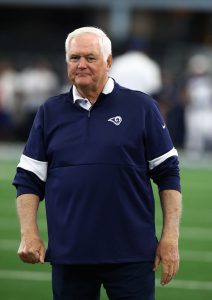 “I have been informed by the Rams that my contract will not be renewed,” Phillips wrote. “I want to thank them for the opportunity to be a part of their success the last three years. Most of all I want to thank the players who I loved workings with. I still want to coach and feel I can contribute.”

Phillips, 72, was a part of head coach Sean McVay’s inaugural staff. He’s been in the NFL since 1976 and even though he has done it all and captured a Super Bowl ring, he has no desire to retire. Given his resume, there’s little doubt that Phillips will be able to hook on elsewhere as a defensive coordinator, even though things did not go according to plan for his Rams defense in 2019.

In 2019, the Rams allowed 22.8 points per game and 339.6 yards per contest, putting them in the middle of the pack in both categories. Still, he didn’t get as much help from the offense as he would have liked – McVay’s much-ballyhooed offense put up just 24.6 points per contest.

12 comments on “Rams To Move On From DC Wade Phillips”