Raiders To Meet With Cardale Jones

The Raiders will audition quarterback Cardale Jones on Friday afternoon, according to Adam Hill of the Las Vegas Review-Journal. The former Ohio State standout has made multiple stops in the NFL but has just one pro game under his belt. 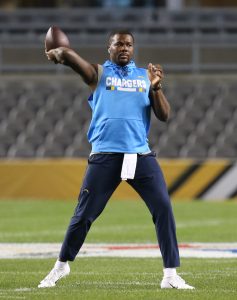 Jones played for the D.C. Defenders in the XFL’s short-lived reboot. His stats weren’t great – he completely just 61 of 113 throws for 674 yards and four touchdowns against seven interceptions. Previous to that, Jones spent time with the Chargers, Seahawks, and Bills.

In 2015,  Jones emerged as a superstar for the Buckeyes when quarterbacks Braxton Miller and J.T. Barrett were lost to injury. After leading Ohio State to victory over Oregon in the National Championship game, Jones went from a relative unknown to a bonafide NFL prospect. He was benched midway through the 2016 season, but many believed that big things were in store for the athletic QB when the Bills tapped him in the fourth-round of the draft. Ultimately, he only appeared in one game for Buffalo.

Even if Jones lands a deal, he may face long odds of making the final cut. The Raiders seem well set under center with Derek Carr, Marcus Mariota, and Nathan Peterman on the QB depth chart.

In 2015, Cardale Jones emerged as a superstar for Ohio State when quarterbacks Braxton Miller and J.T. Barrett were lost to injury. After leading the Buckeyes to wins over Michigan and Wisconsin before topping Oregon in the National Championship, Jones went from a relative unknown to a bonafide NFL prospect. Although he was benched midway through the 2016 season, many still believed that big things were in store for the athletic QB when the Bills tapped him in the fourth-round of the draft.

In 2019, Jones’ NFL career is at a crossroads. After two years with the Chargers, Jones is very much in danger of missing the 53-man cut as he sits behind star Philip Rivers and fellow ex-Bill Tyrod Taylor. The Bolts could conceivably carry three quarterbacks on the varsity squad, but they already seem well set with the far more accomplished Taylor as Rivers’ stopgap.

“The evaluation is going to come in the preseason games when you’re out there against another team and you’re having to manage a lot of different things,” Chargers offensive coordinator Ken Whisenhunt said recently. “The trend for him has been good. He’s improving. Just seeing his command in the huddle now, opposed to what it was last year, it’s much better.”

If Jones does not impress in the preseason, it’s not a given that he’ll land an NFL contract. Last year, the Bolts cut Jones on Labor Day Weekend and were able to stash him on the practice squad. This year, he’s with the Chargers on a low-cost reserve/future contract.

There’s still reason to believe in Jones, but it’s hard to see another team carrying him on the 53-man roster as he approaches his 27th birthday in September.