Earlier this week, coach John Harbaugh told reporters that the team is casting a wide net as it looks into the possibility of adding another quarterback. While he and GM Ozzie Newsome are reportedly pushing team owner Steve Bisciotti to add Colin Kaepernick, the team is also looking into some less-heralded options as well. The Ravens have interest in bringing in quarterback Aaron Murray, sources tell Dianna Russini of ESPN.com. 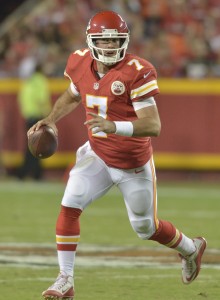 Murray, the Chiefs’ fifth-round pick in the 2014 draft, was cut loose by KC before the 2016 season. Since then, he has had stints with the Cardinals, Eagles, and Rams, but he has yet to throw a pass in an NFL game and has been out of work since his release from L.A. in May.

The attention being paid to Murray will certainly irk those who would rather see the Ravens take a look at Kaepernick. On Tuesday, Murray signed on with CBS to work as an announcer on college football games, so it’s not even clear whether Murray is 100% committed to continuing his playing career.

Just over two months after signing Aaron Murray, the Rams have waived the quarterback, according to ESPN’s Field Yates (on Twitter).

Once a star at Georgia, Murray fell to the sixth round of the 2014 draft after an ACL injury brought an early end to his senior season. Murray spent the first two years of his career in the Chiefs organization before serving on Philadelphia’s practice squad last season. He still hasn’t attempted an NFL pass.

Had he stuck with the Rams through the summer, Murray would have competed for a backup role behind 2016 No. 1 overall pick Jared Goff. For now, the only non-Goff quarterback on the Rams’ roster is Sean Mannion, a 2015 third-rounder with 13 pass attempts under his belt.

The Rams will be the latest team to give Aaron Murray a shot, planning to sign the former fifth-round draft pick, per Ian Rapoport of NFL.com (on Twitter).

Murray spent last season on the Eagles’ practice squad, following offensive coordinator Doug Pederson from Kansas City to Philadelphia. Murray could not make the Chiefs’ roster out of training camp last year in a crowded competition that saw Nick Foles bump each previous backup-quarterback candidate down a peg.

Los Angeles has two QBs under contract presently, with Sean Mannion being behind Jared Goff. Case Keenum is a UFA. A Georgia product, Murray has yet to throw an NFL pass despite entering his fourth NFL offseason. He worked out for the Jets and Panthers in January after the Eagles did not retain him via reserve/futures deal.

The Chiefs managed to keep star safety Eric Berry off the free agent market when they placed the franchise tag on him last offseason. Berry is once again unsigned as free agency approaches this winter, but the six-year Chief prefers to remain in Kansas City. “I hope so,” he informed Adam Teicher of ESPN.com on Wednesday. Berry’s also under the impression his representative and the team have opened contract talks, telling Teichner, “I think my agent had a conversation yesterday or something. It’s early.”

With defensive tackle Dontari Poe a strong candidate to end up with the franchise tag this offseason, the Chiefs might not have that as a fallback option to retain Berry in 2017. Not being able to tag Berry would perhaps hinder the Chiefs’ chances of keeping the 27-year-old, as the two sides never came close to reaching a long-term agreement last summer. Despite some displeasure with the fact that Kansas City tagged him last year, Berry went on to rack up his fifth Pro Bowl nod. In his second straight 16-game season, Berry amassed 77 tackles and a career-high-tying four interceptions.

Packers director of football operations Eliot Wolf is among the general manager candidates the 49ers and soon-to-be head coach Kyle Shanahan will invite to Atlanta for an interview next week, according to Tom Pelissero of USA Today (Twitter link). The team will also conduct second meetings with one of Wolf’s Packers colleagues, Brian Gutekunst, and Vikings assistant GM George Paton, tweets Ian Rapoport of NFL.com.

More from San Francisco and a couple other NFC cities: