Set for restricted free agency, Josh Mauro will be staying in the desert. The Cardinals re-signed the defensive lineman to a two-year deal, Mike Jurecki of Fox Sports reports (on Twitter). 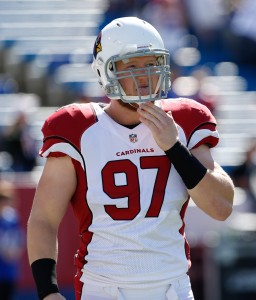 The 6-foot-6 defensive lineman started in 13 games for the Cardinals this season, seeing his first extended look in Arizona’s lineup since arriving as a UDFA in 2014. Mauro ascended onto the first unit despite the Cardinals using a first-round pick on Robert Nkemdiche.

Mauro played in 389 snaps for the Cardinals this season and held his own as a run defender, despite providing little as a pass-rusher. The former Stanford cog has one sack in three seasons, and it came during the 2015 campaign. This gives the Cardinals another option at end, a position that could be influx this offseason considering the UFA statuses of Calais Campbell and Frostee Rucker.

The new full-time starter made a career-high 32 tackles in 2016. He forced two fumbles in 2015 and recovered one.