Eric Berry Will Not Report To Chiefs Camp

Because he has yet to sign his franchise tender, Eric Berry is not obligated to attend the Chiefs’ training camp. Apparently, the standout safety will exercise that right and stay home when training camp convenes later this week, Ian Rapoport of NFL.com tweets. 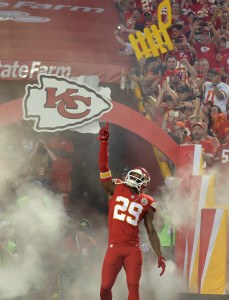 Now that the July 15th deadline for franchise-tagged players to sign extensions has come and gone, Berry and the Chiefs are not allowed to sign a new deal until next offseason. Ultimately, the only way that Berry can play in 2016 is if he signs his one-year, $10.8MM offer sheet. However, Berry could be pushing KC to make other concessions, like an agreement that the Chiefs will not hit him with the franchise tag again for the 2017 season, Mike Garafolo of NFL.com (on Twitter) speculates.

Berry, who earned Pro Bowl nods in three of his first four NFL seasons, was diagnosed with Hodgkin’s lymphoma in 2014, raising some doubts about his future in the league. However, the veteran safety was declared cancer-free in 2015 and enjoyed one of his best seasons this past year for the Chiefs. Appearing in all 16 games for Kansas City in 2015, Berry logged 61 tackles to go along with a pair of interceptions and 10 passes defended. Pro Football Focus ranked the Tennessee product sixth among 88 qualified safeties, and the standout season earned Berry his fourth Pro Bowl berth, along with a spot on the NFL’s All-Pro first team.

During talks with Berry, the Chiefs reportedly proposed that he pay for a disability policy that named the club as the beneficiary. One has to imagine that the request did not sit well with the 27-year-old.

4 comments on “Eric Berry Will Not Report To Chiefs Camp”