Adrian Colbert opened last season as the 49ers’ starting safety. The 2017 seventh-round pick had progressed to the point he was viewed as a potential long-term secondary piece. A year later, he is no longer part of the team.

The 49ers placed Colbert on IR on roster cutdown day, ending his season. Friday, they released him from IR via injury settlement, Eric Branch of the San Francisco Chronicle tweets. Colbert will be free to sign with another team once he heals up from a hamstring injury.

Colbert started six games for the 2018 49ers but saw his season end early when a high ankle sprain intervened in October. The Miami alum made six starts as a rookie. The 49ers re-signed versatile defensive back Jimmie Ward this offseason and will pair him with Jaquiski Tartt. The team also moved 2018 third-rounder Tarvarius Moore from cornerback back to safety, making Colbert’s roster path more difficult.

The Broncos are releasing wide receiver Nick Williams, as Ryan O’Halloran of the Denver Post tweets. With that, the Broncos’ roster is now at 87, three shy of the present 90-man max.

The Broncos have spent Monday doing some cleanup in advance of Saturday’s 53-man deadline. There’s still tons of work to go, but the Broncos have already released linebacker Dekoda Watson, defensive lineman Zach Kerr, and Williams, giving all three players a head start on their job hunt. The releases of Kerr and Watson freed up significant cap room, but Williams’ release will have little impact on the club’s finances.

Williams appeared in two games for the Titans early on last year, but was let go after dropping a would-be go-ahead touchdown pass against the Bills. The 28-year-old then hooked on with the Rams where he caught two passes for 17 yards in two games. The Broncos signed Willams in late July, but his Denver run is up after just one month.

The Rams are set to sign wide receiver Nick Williams, according to Mike Garafolo of NFL.com (on Twitter). Williams, a former UDFA of the Redskins, has history with coach Sean McVay and could contribute quickly thanks to his familiarity with the offensive system. 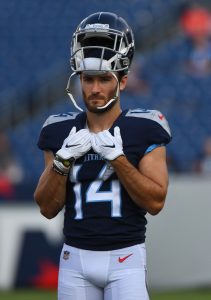 Cooper Kupp is expected to miss at least one game, so the Rams were in need of support. If Williams is on the active roster, he’ll have an opportunity to contribute this Sunday against the 49ers.

Williams appeared in two games for the Titans this season, but was let go earlier this month after dropping a would-be go-ahead touchdown pass against the Bills. It was a bad play for the 27-year-old (28 in November) and he’ll seek redemption in Los Angeles.

The 6-0 Rams will rely on Brandin Cooks and Robert Woods as their top receivers while Kupp is out, but Williams will be among the depth options on hand.

The Falcons have promoted wide receiver Nick Williams from the practice squad to the active roster and waived cornerback Blidi Wreh-Wilson, the club announced today. Atlanta has already ruled out pass-catcher Mohamed Sanu for Sunday’s game against the Rams, and the team announced today that All Pro wide receiver Julio Jones is questionable for Week 14 and is a game-time decision after not practicing all week. 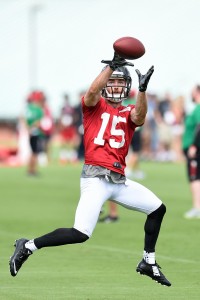 “Sunday, we’ll go out and let [Jones] run some full speed routes, go through the process,” said head coach Dan Quinn. “It’s not the catching, we just want to see the full speed routes. That’s what the plan is – his intent is right to go and play. We are anticipating that, but we’ll see where it goes on Sunday morning.”

Jones, of course, is the key piece of a Falcons offense that has ridden its No. 1 DVOA offense to a 7-5 record. Once leading the NFC South by a wide margin, Atlanta is now tied with Tampa Bay for first place in the division, so every game counts as the club closes out the campaign. According to Brian Burke of ESPN.com‘s Playoff Leverage, a win on Sunday would give the Falcons approximately a 90% chance of making the playoffs, while a loss would drop those odds to less than 75%.

If both Sanu and Jones are sidelined on Sunday, Atlanta would use a receiving corps made up of Taylor Gabriel, Aldrick Robinson, Justin Hardy, Eric Weems, and Williams, along with tight ends Austin Hooper and Levine Toilolo.