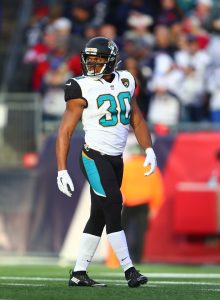 Grant was one of 14 NFL restricted free agents to be tender at the second-round level, and he’s the second — following Falcons guard Ben Garland — to officially sign his tender. There was no rush for Grant to ink his tender, as RFAs have until April 20 to work out offer sheets with other clubs. However, it was always unlikely that any NFL team would have been willing to sacrifice a second-round pick in order to land Grant.

Grant, 26, has never been a focal point of Jacksonville’s offense, but he’s contributed when on the field. Over the past two years, Grant has averaged a whopping 6.6 yards per carry on 62 rushes while scoring three touchdowns. He also served as the Jaguars’ primary kick returner in 2017, and has seen at least 45% special teams playtime in each of his three NFL campaigns.

The Jaguars released veteran running back Chris Ivory earlier this offseason, so Grant could conceivably see more of a role on offense. However, Jacksonville’s running game will clearly be centered around starter Leonard Fournette, with backup T.J. Yeldon chipping in on passing downs.

The Jaguars have agreed to sign nine undrafted free agents, according to Ryan O’Halloran of the Florida Times-Union (multiple Twitter links):