Despite Alejandro Villanueva continuing to attend Steelers OTAs, the left tackle and the team are still not on the same page regarding his contract, Bob Labriola of Steelers.com notes. Using a situation one-time Pittsburgh ERFA Willie Parker found himself in several years ago as a comparison, the Steelers writer advocates that Villanueva take what the team is offering to get some more money upfront. As an ERFA, Villanueva can make just $540K this season on the tender he hasn’t signed. But as a two-year starter for the Steelers, the former Army Ranger is obviously worth more than that. Mike Florio of Pro Football Talk argues Villanueva should not accept a Steelers lowball offer and withhold his services this summer until the team submits a viable proposal. Nothing’s come out on what kind of deal the team has offered. The sides have talked since at least February on this pact, so this has reached impasse status.

Villanueva is a rare 28-year-old ERFA, and under the terms of his initial NFL contract, the would-be third-year starter won’t be able to become an unrestricted free agent until he’s 30 in 2019. Labriola notes Parker signed a three-year, $13.6MM deal to stay in Pittsburgh in the summer of 2006. As the going rate for linemen continues to rise as teams’ ability to develop them out of college becomes more difficult, Villanueva would have considerable value on the market. But his current circumstances could force him to make a decision soon.

Here’s the latest coming out of the North divisions. 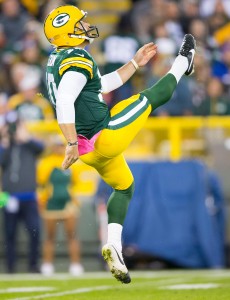 The 2016 campaign was the only one in Green Bay for Schum, who entered the NFL as an undrafted free agent with the Browns in 2012 but didn’t see regular-season action until 2015 with the Buccaneers.

Schum, 28, joined the Packers last August via waivers, and he went on to appear in all 16 of their regular-season games and finish 27th in both yards per punt and punts inside the 20, and 24th in net average. All told, Football Outsiders gave the Packers’ special teams unit roughly league-average grades last year in the punting department. That evidently didn’t suffice for Green Bay, whose lone punter is undrafted rookie Justin Vogel, formerly with Miami.